We have been working with a behavioral therapist to address some of the challenges we have with Kiddo's behavior.  Now "Because Autism" is at play here, accepting change has not always been met with rave reviews with the boy.  However, "Because Life", we needed a way to figure out how to make it a bit more tolerable for all involved.  Add to fact that Kiddo is now fifteen and several inches taller than me, there's no "making him" do anything he doesn't want to do.

Kiddo loves "performing" for therapists.  It's very rare where they will actually see the behaviors we talk about with them.  Especially with the guy currently seeing Kiddo. Kiddo freaking LOVES this dude.  We are very lucky to have him. I consider it my good karma for whenever I've let someone go ahead of me when merging on a highway and I give them the "Go ahead" wave.  I mean, that had to pay off eventually.

And for whatever reason, the one thing this guy has taught Kiddo that has caught on so well with him is a simple three word phrase, "Mix it up!".

Honestly, that's its. It's literally been that simple. I don't know if it was time, maturity, this guy's aura, the alignment of the planets, etc. All I know is, all we have to do is say "Mix it up" when we have to announce a change and Kiddo just repeats it and accepts the change.  I KNOW!!  He constantly tells him to "Mix it up".  He won't let him do anything the same way twice during their sessions and I think that has helped driven the point home.  It's just that all the sudden, Kiddo is getting that change happens.

Like we went through a massive power failure.  A Hell of a storm ripped through here a while back and knocked out the power.  For most people, this inconvenience wouldn't be much more than an annoyance that their AC wasn't working on a hot night.  (Which OMG, Mama Fry is way too perimenopausal to be dealing with that bullshit.) For us, I had a legit panic attack when I realized that Kiddo would not be able to have his nightly viewing of "The Polar Express".  I couldn't even hook him up with the portable DVD player because the DVD was stuck in the machine.  No WiFi, so no streaming.  Nothing. It was a Tom Hanks free zone.

But then it wasn't.  Right around the time we would usually be settling down in front the TV, Kiddo decided to "Mix it up". He started scripting the entire movie line for line from the start to the very end.  Including dancing around during the "Hot Chocolate" song and falling to the ground in a dramatic fashion recreating a scene when the characters in the movie fell down.  To quote my husband, "Oh this is so going in your blog."

OF COURSE IT IS SO GOING IN THE BLOG! THE DAMN POST WROTE ITSELF!

I have watched this damn movie with the Kiddo every night since we were stupid enough to introduce him to it when he was three.  Three, people. He's fifteen. So let's think about that for a moment.  That he just saw his whole night time wind down routine get tossed aside and he "Mixed it up" and found his own way to cope. In fact, I think was safe to say he coped better than I did.  (I'm 45 and hormonal. Air Conditioning is my god now, people.)

Now while I'm all like a dog whose food bowl got moved with my routine, Kiddo was all "No big deal! Mix it up!".  He still didn't care that the power was out or that it was hot.  He was beyond delighted when I told him that we would be going to stay at Granny Fry's. (who had power and my sweet boyfriend, Air Conditioning.) He did not care at all when I said staying at hers meant that I would have to drive him to and from school instead riding with his beloved bus.  He kept saying "Mix it up!" and just thought it was a big adventure even though his parents are thinking this a bit of a pain in the arse.

Basically, it was the adults in his life that needed the social story more than he did.

I'm not saying this will work for every and any kid. Like all stuff with autism, when it works, it works. Don't question that shit. Seriously, don't do anything to draw attention. Act cool. They can smell fear.

But sometimes, it's really important to bring in a pro. I have no problem letting him think he got one over on us because it took an outside person to teach him something.  Dude, who do you think hired the guy? ;-) 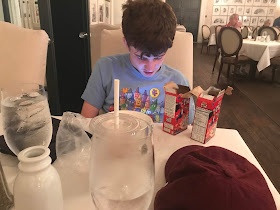 Some things we don't "mix up". His need for Fruit Loops and mine for coffee.