There's no fluffy smooth intro here.  Let's just get down to it. My Kiddo has to pee and sometimes when I am out and about with him, I have to pee too.

Now when he was little, no one batted an eye lash at me bringing him into the ladies room with me.  In fact in most cases he was one of many little boys who were in there with their moms.  I didn't and still don't care when I am in ladies room when I see a little boy in there. I'm thinking of my bladder, not some other kid's wiener.

The thing that has happened is Kiddo has started to grow up. I know!  How rude of him to get taller, bigger, and more adult looking by the minute.  I don't remember telling him he could do that at all. I still want him to be the little tot in a one piece romper stomping around like a Godzilla in those chunky white toddler shoes who would run away yelling like some pint size Braveheart going off into battle.  Usually after someone would turn on one of those loud as feck hand dryers of doom.

Alas, it is not to be.  Instead I have a 5'4 lanky teenager with hair legs and a rapidly deepening man voice following behind me in many a bathroom because why?

AIN'T NO WAY I AM SENDING HIM TO MOST BATHROOMS ALONE! In fact, I have started to map out my errands based on places I know that have single stall restrooms because I can send him into those easily and I know he'll be fine.  Plus, for me, it's not just sending him into a men's room by himself that I have to worry about. I have to go too. So you want me to run into one restroom while he's in another and hope like Hell I can get in and out fast enough so he's not alone by himself because he finished first because despite it being 2017, women's restrooms will always have the longer ass wait! (Seriously ladies. Why is that?  What are we doing in there that's taking so long?  Oh! I know! It's because we're having to bring in our kids with us.)

In certain public locations, he's coming in with me and if you are the general public, you have two choices.  You can either deal with it OR you can help us out by telling businesses to make more "family/gender neutral bathrooms".  Because your bladder is not more important than my Kiddo's. Or mine.  So until we have some more family bathrooms, he coming in with me.  My Kiddo has autism, is intellectual disabled and has limited communication.  There is a reason why I have to be a Smother Mother. It's to keep him safe. If you are concerned he may see you NOT wash your hands, that's on you.

And you know what? I kind of hate that I have to do that too. He's 13.  He doesn't want to go in with me. I know it and yes, I can see women in there doing double takes when he's walking in with me.  Trust me, I will make sure he puts the seat back down though.  I'm trying to raise that boy right.

After all these years, I don't give a flying crap anymore if you give me and my Kiddo a look in the bathroom. I will be the first one to tell you "Take a picture. It'll last longer."  Seriously though, what would you rather me do?  Never leave the house? Never go to pee? Sorry, you're not worth a UTI. 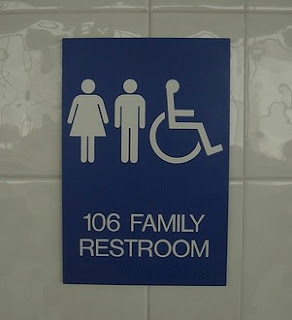 More of these, less of judgement. 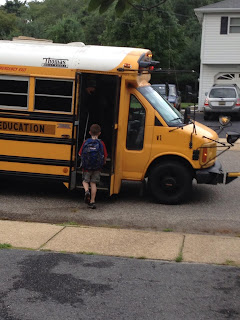