"When the sharpest words wanna cut me down
I'm gonna send a flood, gonna drown them outI am brave, I am bruisedI am who I'm meant to be, this is meLook out 'cause here I comeAnd I'm marching on to the beat I drumI'm not scared to be seenI make no apologies, this is me"

This is Me from the The Greatest Showman Soundtrack


Kiddo's school wanted him to wear this Autism Awareness fundraiser shirt last week. Everyone was suppose to "Light It Up Blue" and all that jazz. (Don't come for me folks who got a beef with that campaign. It wasn't my idea. I am merely reporting the facts for the context of this little piece, m'kay?)

Did I mention that Kiddo goes to a private school that is strictly for students with autism? So basically they wanted the kids to bring awareness to the fact that they all have autism. Which I guess, in a warm and fuzzy Kumbaya kind of way they could bond over. Or it would serve as a reminder to the staff that are all trained to work with autistic kids that these kids in the school strictly for students with autism have well, autism.

Okay, let's just admit this whole event is kind of strange but whatever. They're doing it.  It's April. We're suppose to dial it up a ton with the Autism.  Despite how this month often just leaves me befuddled, I dove right in.

I handed him the shirt in the morning and said "Okay bud. All the kids are wearing this today for Autism Awareness" and it struck me once again, does my kid even really understand that he has Autism?

It's no secret in this house. It never has been. We have talked about it quite openly but I still wasn't sure if he even knew what that meant.  With his intellectual disability to boot, a serious conversations about neurology would not be as easy as our usual back and forth chats filled with our movie script quotes and tons of inside jokes that only we understand.

I said to him "You have autism. That's what makes you, well, you!"

And I got a reaction that pretty much can be summed up as "Whatever".  In my head though I am thinking "Is this a big deal? Should I make it a big deal?  Yeah, it is a big deal. If anything, for his safety I need him to be able to say "I have autism" if anyone asks him. He needs to know his identity!"

I said to him "Say it with me. I have autism!" and he repeats it. Kind of quietly. Kind of unsure of the word. I say it again and encourage him to say it again with a big old smile on my face. I want him to know this autism thing, this is a cool thing about him. I want him to own it.  He says it louder.  Still not as sure.  The word, I can tell, still seems different to him.  While we might have been using it all around him, he sure hasn't been.  This might take some time getting use to a new word to use.

This is where I then think "Does he know what it means to have autism?"  More importantly, "Does he even care?"  Life with the Kiddo is pretty clear for a lot of things. If he likes something, he LOVES IT!  If he doesn't care, let's just say his resting bitch face is pretty stellar.  (Yes, he takes after me. How did you know?)

Since we are also firmly into the teenage years and attitude, I'm not sure if he really gets all the parts of it based of the fact that I get the "IDGAF" face about ten times a day as is for all other kinds of conversations ranging from "Did you brush your teeth?" to "Would you like to watch a movie with me?" So I have to factor that into it too.  If there was ever a person that was unapologetic with who he is, it's my Kiddo. I love him for that.

Cause this is the autism at my house. This is him. I'm not sure how it goes at yours but this is what we've got.  I'm not sure how to fully explain it to him in ways that I know that he knows what it means.  He might know now but can't fully communicate it with me that he does or if he even cares.  I'm just trying to get the sentence in his head so he knows when to pull it out when he's asked.

This looks like a job for a SOCIAL STORY!!!!  (And maybe a showtune. I mean, there's showtune for everything, really.) 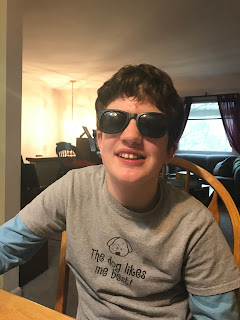 Observe the "IDGAF" attitude. Kiddo doesn't really care what your opinion is of him or if you even have one. He's a baller like that.

How to NOT talk about Autism

I don't know about you but if I had a dollar for every time I found myself stuck in an awkward conversation about autism I could buy Kiddo his own McDonald's franchise. I don't actively go looking for these interactions but they come up now and then.  I'm sure you have had them as well.

Maybe it's at a family gathering with some well meaning in law. Maybe it's with the mom next to you at the "Back to School" night. Autism comes up and the person next to you suddenly has MANY opinions on Autism and is extremely vocal about how you are doing every thing wrong!  It's especially wonderful when there's an audience of people around you watching this interaction.  Some of whom are equally out of touch with the subject but see it as their chance to hop on board with all their crackpot theories.  Despite your best efforts, the conversation is going nowhere good.

This is when I find myself just standing there thinking "Why did I choose to sit next to you? Why didn't I ask you about your kid or just compliment your shoes or something. Ask about your job. Anything other than sit here and bite my tongue."

So many of us find ourselves in these situations and we are so worried about coming off badly in our response.  We don't want to offend them or hurt their feelings but let me tell ya something, that's some bullshit. Here's why.  They surely didn't think that far out when they made their hurtful and/or clueless statements. They didn't remember their manners or if it was the right time or place to talk about an already sensitive subject.  For whatever reason, they are not picking up on your social cues and body language that this talk is going off the rails and you are very uncomfortable.

Perhaps they are the ones that need the social skills training more than your kid.

The longer we have been "Living La Vida Autism", the more I have no problem stopping these conversations. I'm not saying you should get up and start screaming at them about how they are wrong wrongness sitting in a box of wrong but I have no problem stating "Thank you but that information in incorrect. I'm sorry YOU feel that way about Autism. That being the case, let's not talk about it. Seeing as it's something we clearly have very different opinions about."   Yes, you can say that to them. I am living proof you won't die if you do.  Look at me, blogging about, all willy nilly.

And that is usually all takes for them to realize "Oh shit" and shut up about it.  Or they stop talking to me. Whatever.  We're we gonna be besties? Probably not, so screw it. Why should I have to listen to a ton of Autism Myths that further promote stereotypes just because I'm afraid a person I can tell is a bit of an ass might get upset if I say "No, I'm not listening to this.".

And yes, I am aware that sometimes these conversations come from people that are also parents of autistic kids. Guess what? Telling them you would rather discuss something else is entirely okay! Seriously, I bet they would like to talk about something else other than Autism. Look deep into their eyes (or not) and just say "Hey, it's me. Same team here. Let's give ourselves a break and not talk about Autism for a moment."

and Dude, if they still want to go on and on and Autism and Autism about it, CHANGE YOUR SEAT. I give you permission to do so if that is what you are seeking.


You want to NOT talk about it? Come sit by Mama Fry. I'll be happy to talk about anything else.