Your kid has autism. Get over it.

Miracle Mineral Solution or the MMS protocol.  Ever hear of it? No? Need a refresher? Allow me. It's Chlorine Dioxide, an industrial bleach. High oral doses of this bleach can cause nausea, vomiting, diarrhea, severe dehydration and other life threatening conditions like kidney, liver and or heart failure.

It's often given to autistic people, mostly children to "cure them".

And if that's not horrible enough of an idea for you, it's usually done as an enema. Which destroys the linings of the intestines and parents proudly display pictures of bloody discharge on message boards and private Facebook groups because they believe they are ridding their child of parasites and autism.

I'm a bit of an autism old timer by this point. I've been hearing about this treatment for a while. As a matter of self preservation, I try to ignore/avoid this topic and other ones like it because ain't nobody got time for that. If it looks like a duck and quacks like a duck than it's a freaking quack doctor duck. Or something. You know where I'm going with this because I'm kind of sure that the majority of the people that follow my little old blog are rational and thinking people.  Chemicals they would use to clean their bathrooms are not things they are interested in having their child ingest. I mean, it's hard enough to get my Kiddo to eat a vegetable and I'm also not BAT CRAP CRAZY.

This past week I've been binging on podcasts on the psychology of cults. (Yeah, it's safe to say I have eclectic interests.) Anyway, as I was folding laundry I heard a statement in regards to Scientology that made me lose my mind on this topic.  That not only are they telling parents to do this to their autistic kids, they should be giving it to their neurotypical children as well to prevent autism from possibly developing and that's when I let out a string of curse words that would make a sailor on shore leave blush.

A reenactment of me hearing it. It totally messed up my good hair day too.

Cause it's not enough to abuse and possibly kill your autistic kids. Let's get the other ones too while you're at it because you are THAT afraid of autism.  (Fun fact. Scientology doesn't recognize autism as it falls under the area of mental health and that doesn't exist in their world and yet, they have no problem selling this MMS junk as the cure to autism. You know, the thing that doesn't exist.  Ummm, okay then.)

You want to know why there are so many autistic adults online that seem very angry at parents?  It's because of stuff like this and frankly, can you blame them? Like seriously, imagine you are autistic and you first stumble across a post about this. How these parents are willing to take the risk that their kids will have organ failure because autism is just too scary and needs to go away.  Or, imagine being an autistic adult that somehow survived this treatment.  It can't even wrap my mind around that.

The people that do this are the reason we can't have nice things and it's time we had a "Come to Jesus" conversation.

Your child has autism. It's not what you planned but hey, your kids didn't plan on having parents that would consider bleach enemas as a sound medical choice either. Looks like you're both disappointed but how about accepting what life gave you so you BOTH can be happy and move forward.  How about that? Making your kid happy.  I think that's what all parents can agree on.  We want them happy and we want them safe.  Having your child ingest bleach, NOT SAFE.

It's quiet possible that even if your child wasn't autistic, that they might develop and grow their own set of ideas, opinions, and beliefs that are completely different than your own or what you raised them with.  Despite sending me to Catholic school all my life, my butt isn't in a pew on Sunday.  Guess what? My mom didn't try to give me bible enema.

Your kid has autism and that doesn't change a damn thing about them. It just explains their neurology.  That's it.  Yes, autism has challenging aspects to it. I won't sugar coat it. Some of these can be down right hard to live with but this "miracle solution" bullshite? This has to stop.  This is abuse. Plain and simple.

Sometimes the only cure needed here is a change of attitude.  Your kid has autism. Accept this and them. 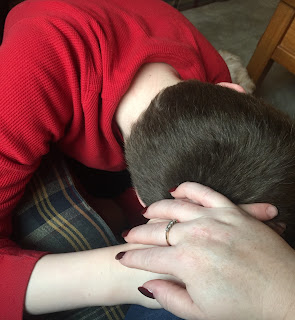 I accept the fact I have to give the Kiddo no less than 50 head scratches and squeezes a day.

It's okay to resent some of this stuff.  Autism.  There, I said it.  You are allowed to be upset by some of the things that autism does.  Yes, you can.  You are not a monster for acknowledging how you feel. You can be mad at it.  Some parts of autism can be not only hard to understand but very hard to live with.  It's what you do with those feelings that counts.

I would never dismiss a feeling in a person.  That's their right to feel it. Sometimes you're stuck in it for a few moments and sometimes, a few months.  One feeling I'm sick of feeling is those who judge us and our feelings about autism.

Guess what my dears? I can be mad about some of this shit AND still be a good mom.  I can resent the crippling anxiety and sensory issues AND still celebrate the fact that my Kiddo is awesome for his unique way of looking at the world.  Humans are complex creatures.  We can have more than one feeling going on at one time. It's possible.  At the end of the day, when you are the one being kicked, grabbed and screamed at by him, when you are the one cleaning him up after he barfs from anxiety again, when you are the one picking up the pieces for the hundred time of his latest meltdown, then you get to have a say about my parenting.  Till then, go be perfect someplace else.

I can still take issue with the folks that left my life because autism came along in ours and made things complicated.  Likewise, because of autism there are now literally thousands of wonderful people in our lives that wouldn't have been otherwise. I mean, it's kind of nuts knowing that.  I thought I had good people around us till they weren't around anymore and although that doesn't happen as much, it still happens as his needs change.  But pick you over my Kiddo?  Bitch, please and BYE.

Autism brings a lot of mixed feelings.  All the freaking time. I struggle with the daily. I'm trying my best and I even know that sometimes my best will still fail him. I'm not going to deny when I have those mixed feelings though.  Even though I resent having them. 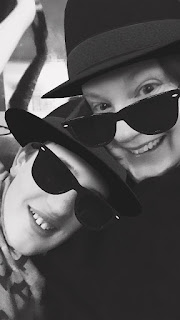 Kiddo, It's 106 miles to Chicago, we got a full tank of gas, a side of fries, it's dark, and we're wearing sunglasses. Despite it all, there's no other person on earth I'd rather be on this road trip with.