Past Me meet Now Me.

"At what age did your son start to talk?"

"When did your son toilet train?"

"How old was your son when he first slept through the night?"

If I didn't know any better, I would think those emails were from me. Well, Past Me. Which would be kind of Sci Fi movie like that Past Me was writing to Now Me. It would be handy if Now Me could write back to Past Me something really useful like "Don't forget to take the chicken out to defrost for dinner." But I digress...

To answer these top three questions:

1) At five with repeating "Hey, hey, hey!" like Dwayne from "What's Happening?"

2) At seven, eight, nine, and still at eleven on the odd night or morning after now and then. Dry sheets this week, so YAY!  My washer and dryer sure appreciate a little less work.

3) The other night around 1:30AM the Kiddo decided it was a great time to discuss his desire to go to the local diner for french fries. In his defense, they do make really good fries. It was pretty cool that he called out for his Dad, not me, to discuss this plan. Well, I'm not sure my husband would share that opinion but Hey, he called for you dude! So that whole "Sleeping through the night thing.". We don't have that perfected yet. Let's call that a work in progress.


"I just need something to hold onto for hope."


Now this I get. Girl, you are preaching to the choir here. I am holding onto hope and my sanity with a white knuckled grip. The Kiddo is only growing older and it seems to be at a faster rate than I ever knew that time could go.  Now Me really wishes she could sit down Past Me and tell her to Buckle Up. I'm not sure Past Me would have fully understood what that meant though. Past Me was too busy in "Fix It Jesus!" mode.

So, I don't know how much I'm about to say will make sense to those who are really intent on finding out the magical age as to when things will happen. I've said it time and again. These kids create their own milestones.  They just do. There is no set timeline as to when anything will happen or won't. I know you feel like you are racing against the clock here, but there really is no end to all of this. Autism is along for the ride. 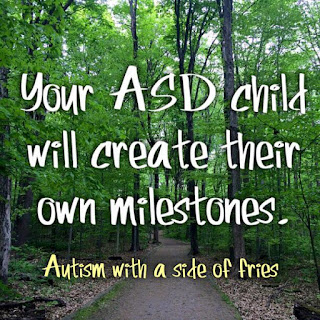 Know it. Live it. Embrace it.


Some things will happen and some things might never happen. That can be good and bad depending on what you are talking about. Now Me really wants you to know that. I know that's a pretty abstract concept. Past Me would hate Now Me for saying that.  "Like stop trying to be deep about this." but I have no other way to explain it.

Now Me wants you to think of it this way.  You now know the ages my Kiddo did something you were asking about. What if that age comes and goes and your child still can't do something?  Can you see how holding on to that number is like setting yourself up to be sad if it doesn't happen by that point?

Now You is coming. I swear this much is true. Now You will be ever changing and looking at Past You with some serious side eye and a knowing sympathetic head nod. Now You will want to take Past You into their arms to both hug them and shake them by the shoulders.  I know this because I'm pretty sure Now Me would probably slap Past Me and tell her to calm the eff down.

Now Me or Now You. Not perfect. Not by a mile. But they are also a tiny bit happier living in the Now.

Future Me however, Man, that chick is a worrier.  Somebody order than gal another side of fries.

Posted by Eileen Shaklee at 8:02 AM