Two times on Mother's Day I got a "win". Neither of them were grand gestures or big productions but there was no doubt in my mind something we are doing is working out.

Win Number One. We ran out for bagels in the morning because one of the benefits of getting up at the butt crack of dawn on a weekend is getting fresh, still warm from the oven, bagels. Added bonus, because we live at the Jersey Shore, in the summertime we can do some fantastic people watching as we see Bennys (aka what we call the tourists)  who are on their way home from where ever they spent the night before in last night's club wear outfit and smeared make up. It's highly entertaining!  But I digress.

Kiddo was sitting at the table and was getting kind of bouncy hyper howler monkey loud and I shot him a look and said "Hey!" and he immediately stopped what he was doing and said "Sorry!" and went back to eating his bagel.  So he not only listened to a non verbal BUT boy was my look LOUD request but he said "Sorry" to boot. Reading social cues and correcting his behavior while apologizing! Hot Damn!

Win Number Two. As it was Mother's Day, the theme of "I'm not cooking squat" continued.  Out to get pizza we go.  Now as this requires more sitting and waiting for food and we had already done this morning, the Kiddo was having NONE. OF. THAT.  Waiting again? Oh Hell no. He is not about that life.  So he was getting antsy and ornery but we managed to kill time and the pizza finally showed.  As my husband and I were just about to take our first bites, the Kiddo declares loudly "I want bathroom!!!"

Really Kiddo? Really?  You couldn't have asked to go while we were killing time and waiting? And we both know he really doesn't have to go because the Kiddo is much like a dog and he likes to mark his turf everywhere we go that has a bathroom he can use. But there's no way we can take that chance and say "no" cause that will be the time he has an accident and off my husband goes to take him. We're both annoyed but what else can you do?

They come back and the Kiddo wants to get back into his seat. The place is crowded and we're packed right next to another full table. The Kiddo normally would not think twice about climbing over anyone and everyone to get back to his seat. He doesn't need you to move. He'll just happily flop over you. But he pulled out surprise number two. He actually said "Excuse me!" Color me shocked! So I and the lady at the other table scooted on over so he could squeeze on in.  He was totally aware of his body and our personal space and used manners! Heavens to Betsy! Who is this Kiddo?

So in the grand scheme of things, does it mean all our worries for the future are gone? NOPE! Not even close. It does make me feel slightly better that some of all this hard work we've been doing is paying off.  By no means are all the problems solved and I'm sure I will still have to remind him to use his manners again and again and again and again.  It's a start though. I'll take that. :-) 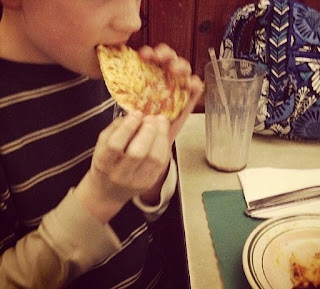 He sure didn't share any of this pizza though. Truth be told. Neither did I. ;-)

Posted by Eileen Shaklee at 8:44 AM