It was just a bowl of popcorn.

It was just a bowl of popcorn but it was so much more.

It was a step towards independence.

Friday was a tough one for us.  I woke up sick with a sinus and ear infection. (Yay me! I'm an overachiever.)  Kiddo was super anxious. I could tell he was headed towards a meltdown but I kept him moving and busy until the bus came. After that, it was out of my hands.

Two and half hours of sitting at the doctors for myself and then the pharmacy, I finally came home. I promptly laid down because I had a free hour and intended to rest while I could. Then I heard "Whiskey in the Jar", which is my ring tone on my phone. I opened one eye and peek to see who it was on the Caller I.D.. School. Well, that is never good. Another meltdown in class. Like a pretty bad one. One where I might want to start slamming back some whiskey in a jar because I am at the point with the Kiddo where I don't know what to do anymore.

I mean, I get it and luckily so does the school. He's leaving a place he's been at since he was five. Big HUGE change and transition to Middle School. Despite all the social stories, tours, and talks about the place, it's still the great unknown to him.  I knew we would see some behaviors with all this going on. I just didn't realize it would manifest like this. By this I mean, throwing furniture at school. Attacking staff that he normally greets with smiles, hugs, and high fives. It's breaking my heart. I don't know how to fix this. No one seems to know what to do either. It's a lot of "Well, once he starts the middle school and gets into a routine. He'll probably settle."  We all hope anyway.

He's not the only one freaking out about the great unknown here.  Is this a blip or a preview of more to come? I can't even wrap my head around this. How on earth can I get him ready for the world with this kind of behavior as a constant?  How can I make him be independent?  Despite my "I can never die" plan, I need to know this Kiddo can face the world.

So needless to say, I had a big old sobbing fest and pity party for one.  Eventually I stopped because I was already congested as Hell.  I didn't need to add to it. We would power through this. We have no choice.

But the doubts. There were still in the back of my head and they had set up shop. Moved in furniture. Painted the walls, hanged some pictures. They were there for the long haul.

The Kiddo also came home with a big surprise for me. It seems his teacher, correction, the whole school staff practically had ordered the #TeamQuirky shirts I sell and took a ton of pictures wearing them with the Kiddo.  She made a nice photo collage for us and framed it.  Cue more ugly crying tears and heaps more guilt about his behavior. They get him. They know this isn't him. They love him like I do.  God dammit, I'm crying again just typing this.

Needless to say, by end of the day I was pretty much spent. Despite being cheered at the sight of the Kiddo running around holding this picture to put in his room, I still licking my wounds. Feeling sorry for myself. Worrying about the future for the Kiddo.  I did the mature thing and made one with my couch and the TV remote cause I can't even drink on these damn antibiotics for my various infections!

And then the Kiddo swaggers in the family room.  One hand holding a cup of juice with a straw, the other a bowl of freshly made microwave popcorn. My husband had been sitting beside me the whole time. He didn't help him make it. I didn't help him make it. I'm pretty sure the dogs would have steered him to just take out the cold cuts for a snack if they could have helped. So it meant the Kiddo did it all on his very own.

Because when you settle down for your 5037504th viewing of The Polar Express, you need some popcorn. Mom and Dad are busy, so you'll just do it yourself.

I haven't taught him what to do but he's watched me countless times do it. He even went full foodie on me and sprinkled Parmesan cheese on top!

It was just a bowl of popcorn but it was also a sign that maybe, just maybe we would get through this. 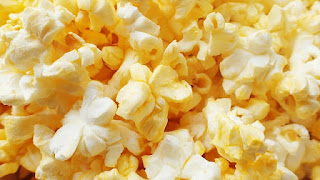 Making popcorn counts as cooking a meal, right?  I mean, it sure was my meal in college many a night.