To say that the start of middle school has been bumpy would be an understatement.  It's been a downright cluster fuck.  We keep chugging along because we are determined to get this to work. I will email, phone call, and or meet with anyone and everyone under the sun to get all the ducks in a row for my Kiddo.  It's not even an option.

But I would be lying if I said this stuff wasn't it taking it's toll on my own mental well being. When you are the parent and number one advocate for you kid, you don't get a choice to hide under the covers and give up.  I used to work with this population as well and I think back to those parents who it seemed to me just didn't give a shit about their kids.  Maybe it wasn't that they didn't give a shit. Maybe they had just decided they were done with all this never ending stuff.  They had just had enough.  I mean, how many times can a person be overwhelmed daily before they just say shut down?

Or maybe they just never started. I'm not sure but I'm too far in to walk away.

There are things I have gotten used to with my Kiddo.  Things I have become numb to and things I know longer get my knickers in a twist about.  I am focused on getting Kiddo comfortable with middle school. I can't care about the stupid little stuff because I cried over that long ago.  Then something comes up out of the blue that knocks the wind out of me.

This time it was the 6th grade class trip.  That he wasn't included in.  I saw it on the calendar.  I received the general email blasts that all the parents got about it but it never came up that he was joining all the other 6th graders on it.  No permission slip came home.  No word was mentioned.  Not even an explanation.  Nothing. Nada.

Prior to this school, Kiddo went on every class trip that all the other typical kids his age went on.  He and his classmates were included.  It wasn't even a case of "Oh gee, we're going to be swell and LET him go."  It was "This is the date and pack a lunch.".

And this is where stings.  His behavior has not been ideal. I know if I bring it up the trip, I'm going to get that thrown right back at us.  While the one to one aide has finally been hired, that person still has to be approved by the Board of Education and be fingerprinted.  So I can't even say "But he'll have his one to one!".

It hurts that we weren't even given the awkward phone call or email about it though.  Not even a "Hey, he's still adjusting.  Maybe next year?".  I could come to terms with that.  Right now, it's just another thing that just makes us feel left out.  He heard other kids talking about it in passing.  He knows it happened.

Did I mention this is also the school that does a big fundraiser "Volleyball for Autism" event every year? Which is great that they do because they raise a crap ton of money for local autism charities. I think that rocks but there is a part of me that thinks "How about some charity towards my Kiddo? How about including him? How about giving him a chance to prove that he can do it?  How about at least giving us the courtesy of explaining why he's not included?" I'm pretty sure when this event rolls around the school will be quick to send home information on it and how we can help promote and fund raise with them.

There's just something about that which makes me think "Don't call us. We'll call you, when we need you."

The thing is inclusion means the good and the bad and at least an explanation as to why something won't work and perhaps trying to find a way to make it work in the future.  Not just bits and pieces here and there.
This damn trip was like a line the sand.  I have to pretend it doesn't sting as bad as it does because I have to pick and chose my battles.  But all I can think is if the Kiddo noticed there was a trip he didn't go on, I bet the typical kids noticed it too.  At the same time, he's still in the weeds with this transition.  I guess we'll just have to let this one go. 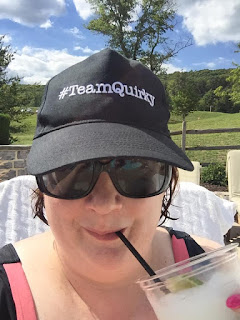 #TeamQuirky will rise again.  After this round.