The Stupid Ass Stuff I Still Do As An Autism Parent.

I wanted to touch base with the Kiddo's teacher and the BCBA at his school.  While they are pretty good about answering emails and communicating in the notebook, there's nothing like a face to face sit down.  As I was driving to my umpteen meeting about my Kiddo, I couldn't help but feel nervous.  It's not me we are meeting about.  Why am I taking it so personally?  It's hard not to when the topic of the conversation is about a person you just happen to have grown inside of you for nine months.

But despite the fact that the Kiddo is twelve and has been in school since the day after he turned three, this is the stupid ass stuff that I still do as an autism parent.  Worry about every single meeting and have that general sinking feeling of "being in trouble" with the school.  I suppose our time at the town's babysitting *cough* pardon me, I mean "middle school" also has not helped with the general feeling of meetings.

And what happened? It was a pretty good meeting. We covered a lot.  There were no real surprises. Discussed a lot of different ideas of what works and what doesn't.  By the time I left I was feeling rather happy about it all.  So what the heck Mama Fry?  Why do I get myself into such states of mind?

Here's another example of the stupid ass stuff I do.  If you have been following this blog for a while, you know all about "WTF Wednesdays". If you don't, well, long story short. Kiddo hates Wednesday because autism.  Honestly. That's all I can say to explain it. It's just one of those thing #TeamQuirky things about him that I've learned to accept.  Anyway, I heard from the teacher today that he had a much better Wednesday than I thought he would. (I had emailed her this morning that he was wound for sound and to give her a chance to either gear up or fake being sick and call out.)  What was different about today? She kept him SUPER BUSY! Like she always keeps him going but she really cranked up the special jobs for him today and he loved it.  Kiddo loves having a job.  She even got him an extra shift at the school store for him to do today.

I was telling my husband this tonight and he just chuckled and said "Wasn't this the exact thing we told the old middle school to do with him? That they never did?".  Yep, it was.  We told them that time and again and they never fecking did it.

So what stupid ass thing did I do? I started brooding on it. I went back full force to that time and place with them when we were all so super miserable.  Why? What is the function of this?  It serves no purpose. We are never going back there. It's pointless.  But yes, let me just get good and miserable for the sake of it. Let me just waste my time and be angry at how they failed him.  Somebody call Cher and get her to slap me and yell "SNAP OUT OF IT" Moonstruck style at me.

Fixating, it's not just for my Kiddo.  I am guilty of it too.  Good gravy, I'm the one that's suppose to be raising him and teaching him how to navigate through a world not made for him and I can't even get my shit together.  I need to write a social story for myself.

"It's okay to remember bad stuff.

It doesn't mean it's going to happen all the time.

Just remember to take a deep breath and order another side of fries." 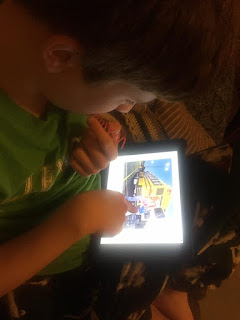 "Geez Mom. You thought I was the one that obsesses too much? Now let me get back to looking up different manufacturers of school buses."