Inclusion for all! (But only for a little while.)

Inclusion. The first twelve years of the Kiddo's education was in the school district. He went to the regular school just like all the other kids in our town. Now granted he would spend a majority of his day in a self contained classroom filed with other kids with special needs.  He was also  in and out of that class to spend time with his fellow neurotypical peers. His elementary school was BIG on inclusion and we were pretty happy about that.  The kids got to know him and all his quirks.  They loved that he loved to sing and would do so with him.  It was nice to be out running errands and some random kid would run up to say "Hello" to him. I found it heartwarming and it made me think "Yeah, this next generation is going to be the one that gets it.  They are just going to be so use to all things Autism."

So needless to say, when we realized he had to leave the school district for a different educational placement, I was really worried about the inclusion factor.  I mean, in some ways it's great that his current is school is nothing but autistic kids.  No one cares if some kid is flapping because they might be too busy doing their own stim.  In a lot of ways, Kiddo has become more interested in the other students for the first time.  Maybe it's because he can really relate to them in a way he couldn't before.

The fact remains that unless we see one of his teenage cousins, he isn't hanging out or spending any time with neurotypical peers.  At all.  I feel really worried about that but I also can't help but feel it's a bit "Out of sight,  out of mind."  We left the in district schools and what I feared would happen, happened. We are totally cut off from that whole community now. I wonder if the kids forgot about him or if the parents forgot about me.  I get it.  Their kids and lives get busy but they are busy “over there” in Neurotypical Land.  Since we don’t travel those parts anymore, are we just a memory in yearbook or a picture that gets tagged on Facebook. “Oh, remember Kiddo? Remember that crazy mom of his? She was fun to sit next to at the PTA meetings."

What happens when there are no more chances for inclusion with your peer group? I'm hear to tell you. The older you kid gets with autism, the less "stuff" will be out there for your rapidly growing kid.  Not gonna lie, that kind of freaking sucks.  There's just very little that both neurotypical and autistic teens can join together.  There's a very distinct line.  Unless a lot of prompting and organizing goes on in the background by adults, these typical teens are going to be busy doing what typical teens do.

Sure, you see the odd "feel good" story about the basketball coach that put the autistic teen in for the last ten minutes of a game and everyone cheers when the kid makes a basket. It wouldn't be prom season without some viral photo or video of a typical teen taking one of our quirky kids as their date.  I'm not knocking on either of these things. Inclusion is inclusion and I'm a inclusion junkie. I'll take it where I can get it.  I'm just asking, can't their be more?  Of course, I can't figure out how to make that happen. I also don't know how much I can push that whole thing with my Kiddo. He does has his limits with those wacky neurotypicals.

This shouldn't be hard to do but for some reason, it is.  Life just gets so busy for every family. Even our one "go to" NT family isn't one we get to see anymore.  Other than an occasional "like" on something one of us posts on Facebook, I don't hear from them. How many times can I call, text, or email for a get together and hear silence on their end? Okay, I get it. It was cute when the Kiddo was small. Now that he's huge, not so much so.

I guess what I am trying to say is what's the point of inclusion if you only do it for a limited amount of time? How can we go about fixing this?  I'm almost at that point where I don't want my Kiddo to have only a viral moment here or there.  He should have access to those people all the time. They deserve to access to my Kiddo all the time. He's freaking awesome. 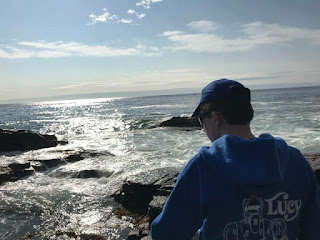 Posted by Eileen Shaklee at 8:24 PM