I think it's safe to say we all came up with new coping skills in order to maintain our sanity during lockdown.  Kiddo is no exception.  As the world has started to reopen, I have seen there are a lot of skills that he previous had that have gotten rusty.  Like eating out.  Oy vey, he went from a kid that would gladly eat out for every meal of the day to one that is like "We can't get this to go so I can eat fries in my pajama bottoms like the good Lord intended?"  We're working on it though because my husband and myself very much like NOT COOKING and we are slowly seeing progress with that again.

But man we have hit a wall hard with Sundays.  All the sudden we have seen Kiddo become extremely fixated on Sundays. I have always joked that you better have a plan for the weekends or he'll make one for you and it will most certainly be expensive.  While that still stands for Saturday, Sunday has become a routine around the house that is NOT to be messed with.

And as routines go, it's not really disruptive or outrageous.  It centers around that the mail isn't delivered on Sundays.  Which as you can imagine is a bit of an odd thing to fixate on when you are a kid that doesn't pay bills.  So why the focus on it?  Well, maybe it's the fact that it comes all the other days of the week. Even during the peek of COVID, he could count on the truck rolling down the street.  We also made it one of his jobs to go out and get it, which again, lockdown. Other than walking the dogs, it was one of his few outings he could count on.

In turn he started to hyper fixate on what WOULD happen instead.  What he could control because despite his campaigning, I was not able to get a part of the Federal Government to make the mail come on a Sunday.  (I know, I know. It's like I didn't try.)

So it became about certain CD's that he would listen to at certain times throughout the day. (Yes, CD's. Yes, we have an Alexa and all the streaming stuff you could want. He still loves CD's. #BecauseAutism)  Followed by certain movies he "script watches".  What's that you say?  Okay, have you ever been to a Rocky Horror Picture Show at midnight?  It's kind of like that but with less garter belts and slices of toast flying through the air. (If you have never been to a midnight showing of Rocky, I urge you to correct that situation.) He will utter every line in the flick and reenact every scene right in front of the TV. It's actually quite impressive and highly entertaining.  Then there are certain books to read, games to play, etc...

In a lot of ways, this is good. He keeps himself busy. It clearly soothes him. It's a day off from school and therapies.  He should spend it doing the things that he likes.

But in other ways, it's hard because he now refuses to leave the house on a Sunday and like it or not, sometimes we have stuff to do. Plus, I cannot leave him home alone to do these things like a parent could of a typical seventeen year old.  We try our best to accommodate and it's clear he very much NEEDS this routine right now.  Like all things with autism, I have learned to just go with it.  It will pass but it's sometimes very hard to watch your child struggle.

Just this morning my husband offered a trip to the beach for Kiddo and the look of sheer panic that went across of his face broke my heart.  We tried to show him where he could fit it into the schedule but we realized quickly it was not going to be pretty if we attempted to this outing. On any other day he would be the first one running to put on his swimsuit and grabbing a towel to go.  My husband and I were then stuck in the grey area of knowing he doesn't want to change the schedule but he also loves that outing. I could see Kiddo start to sweat.  I knew immediately this would result in a meltdown.  He just didn't know how to communicate to us "I want to go but not today."

And this is where it gets tricky because I don't want him to think we are taking away this thing that he loves because he just doesn't want to do at the moment.  Thhen he will fixate and meltdown over it.  I have to show him it's okay to say "No thanks!" I talked him through it.  He quickly latched on to "Beach is finished!" despite not having gone to it at all.  Whatever, it somehow calmed him and kept him from melting down. Although I suspect the use of his emergency anti anxiety medication that I wound having to give him helped too.

He is currently hiding in his room as I type this.  Very much avoiding us. I am sad that just offering something that should be fun stresses him out so badly.  I am worried that for many Sundays to come he will bring up "Beachgate". (How dare we?). I feel bad that my husband just wanted to do a fun thing for Kiddo that in the past he would be very happy to do. The fact that someday he may just decide "I'm not doing this routine anymore" just kind of kills me because that's usually how stuff like this goes. He just decides he's done with it and we'll have to learn as we go whatever it is next he does to self soothe.

I know this is the aftermath of COVID lockdown. Never did I ever imagine that I would have to give my son his anti anxiety meds because of a beach trip suggestion but here I am on a Sunday morning listening to him sing "Thomas' Winter Wonderland" at the top of his lungs because apparently it's the time of the day we do that now. 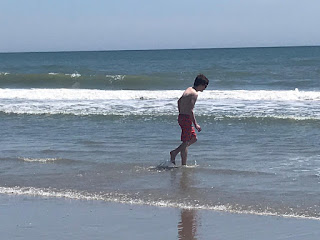 Flashback to a day at a beach. Clearly not a Sunday where one must sing the entire Glee catalog.

Posted by Eileen Shaklee at 8:42 AM