The Kiddo had his 5th grade concert last night. Not gonna lie. Due to his recent multiple meltdowns and behaviors, I was Hella nervous. Not only would be going off the night time routine by doing this, he wouldn't even be performing in his school. With the number of people coming, they moved it to the high school. So let's add brand new environment to the mix of anxiety with a side of nerves. Oy vey!

About three hours before we had to leave, I get an email from the school saying the Kiddo had been written up for behaviors on the bus from the day before. Which is news to me considering the bus barely slows down to boot him off of it each day.  Are you freaking kidding me???

So I walk out to the bus to meet it as the Kiddo is coming home and ask the driver how he did today on the ride to and from school. She replies "Great!".

Me:"Yeah. How about yesterday? Did you follow the Behavior Plan?"

SILENCE! Complete silence. From both the driver and aide. They literally said not a single word, which answered it all, didn't it? Because why follow a Behavior Plan when you can just write him up for having the nerve to keep acting autistic. Heavens to the Betsy, when will I give a that boy of mine a firm talking to to clear that up!

Me realizing I might need my own behavior plan at this point grit my teeth and reply: "Well I guess I'll be calling the behaviorist to come ride the bus with you guys again. BYE!" and walk away.

Needless to say I'm pretty sure at this point that the performance is going to be dicey. I mean, what the heck is going on plus it's not being addressed when it actually happens. UGH!

But dammit, Kiddo loves proving me wrong. As soon as he reported to his class that night, he was over the moon about it. Keep in mind a lot of his behaviors this week at school have been during the time of the choir rehearsals. Something just clicked though. He knew that he was now "on" and he did great!  I mean there were times his #TeamQuirky was showing with some flappy happy dance moves while singing but I chalk that up to watching too many musicals with Mama. Standing still to sing is NO FUN!

He even had a speaking part at the end wishing the everyone there a good night. Just waltzed up to the mic like it was no big deal in front of a crowd of hundreds. Yes, it was safe to say he really tested my waterproof mascara as my eyes sprung a leak.

In fact, there was a moment when I started looking at all the other kids there. Most of them were those mythical "neurotypicals" you hear about in books and TV. ;-) Yes, I was doing the worst thing I could be doing.  Comparing him to them but hey, I'm human. I make bad choices.  I also couldn't help but notice that a lot of his "typical peers" that around him to help model "appropriate" behavior aren't perfect.  IMAGINE THAT!!!

I saw nose picking, elbow shoving each other, one of the girls unclip her hair and restyle it, and most of them at one point or the other staring at the ceiling.  One of the best moments for me was seeing a young girl in the band pit kick off not one but BOTH of her shoes and start to pick at her toes while balancing her flute on her lap.

It was then it sunk in. Neurotypical kids are WEIRD.  My Kiddo suppose to learn from them?  Sweet Jaysus, he was better behaved at this thing than most of them!

Does this solve all the current issues we have at the moment with the bus, WTF Wednesdays, and anxiety? Nope but it sure did make me feel better.  Made me feel like we could get through all this stuff. Hey, he actually keeps his shoes on when we go places. We're already ahead of the game!

Of course, this morning he had a big honking case of anxiety. Eager to start his weekend. I had a bundle of nerves because I had to make multiple phone calls about him today to his case worker, the bus company, and the principal. I'm not thrilled about it and it's going to be a lot of work trying to figure out what to do. I did make a lot of headway and he managed to get through his day too.

Seriously, both shoes kicked off while in front of a crowd of people in the middle of a show. Young lady, I don't know who your mom is but if she saw that like I did, I'd like to buy her a glass of wine. She could probably use it. :-) 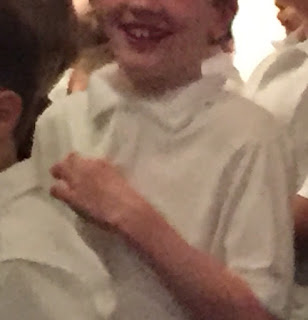 Happy Kiddo at the show makes me a Happy Mama!

Posted by Eileen Shaklee at 9:15 PM