I'll be on my way

"I'll Be On My Way" by The Sawdoctors

After a long battle with various auto immune disorders like Scleroderma and Sjogren's, my father passed away. It wasn't exactly expected. My Dad had sixteen separate hospital stays due to various complications from them.  A few of these stays were pretty touch and go but he always bounced back. In some ways I had made my peace with idea of his death years ago.  So it was a bit of a shock to have it happen after a pretty good day for him.

My last words to my father at the hospital were "I gotta go and call the school the district and give them Hell again." and he replied with a smile "Of course" because my Dad knew that is exactly what I was going to do. Next thing I knew I was calling a funeral home to make arrangements for him while trying make sure I can get the hours we need so Kiddo will be in school because no matter what, that routine has to stay the course.  Especially after the last three months we have had with switching schools.  If there is one priority here, it's Kiddo and I know my father is somewhere nodding his head in agreement.  What more can I say? I know my Kiddo's limits. Sitting through a funeral service isn't one of them.  He'll go to the "afters". Which is what we Irish folks like to do after the burial.   Oh and get this, when is this all going down?  On a Wednesday because of course it would.

Lots of people make a point of asking me how is my son handling this.  Does he understand? The truth is I'm not really sure.  My husband took the reigns on explaining what happened while I was busy dealing with what happened.  By the time I returned, Kiddo informed in a matter of fact fashion that "Papa was in People Heaven."  and further elaborated that People Heaven was right next door to Dog Heaven where our old dogs that has since passed on now live. Since it's happened he's been scripting all that a lot.  Sometimes it's nice to hear. Sometimes it stings. I suspect like most things my son does or says, I'll just get used to it. Kids are far from quiet.  It will just become part of the background as all these things do.  But to ask me how he is? Well I'm going to say kind of confused.  That's what I'm feeling too so it's good we're going with a theme.

Where I'm going , I don't knowBut I'm heading off in sunRain hail or snowIn the yard I hear the children playNow I'll be on my way"

My Dad wasn't your typical kind of guy.  Didn't care for sports, didn't go fishing or was BBQ master.  None of the usual "Dad stuff".  Without a doubt, my Dad was a member of #TeamQuirky. He always just did his thing. Mainly which was an extreme fascination and love of aviation.  While many other father's played "Couch Quarterback" on Sundays during football season, my father climbed into gliders.  Which happened to be airplanes that don't have engines.  They are towed up by another plane by a cord which eventually gets dropped and then you just soar around the clouds.  Sounds a bit nuts, doesn't it?  But trust me, it was fun.  Many times as a kid he took me and or my brother with him.  Now that I'm a parent I think "You took your minor children in a plane with no engine!?!?!"  But I'm so glad that he did.

My father wasn't a "talker" but what he did say was always insightful, witty, and with a sprinkle of very dry humor.  Even if he didn't always get what I was doing, he still supported it.  He was happy to see his love of all things planes passed on to the Kiddo, who can clock any helicopter coming over the house before anyone else can hear it ala Radar O'Reilly from MASH.  I like to think that my Dad is in his own version of Heaven. A huge library filled with every book on World War Two that was ever printed and a nice Lazy Boy recliner to sit in to read them all with a stereo that plays nonstop Johnny Cash and Broadway show tunes. What more can I say? The man had eclectic taste. ;-)

I'm not sure what's next other than we'll get through it.  Autism has taught me that much. 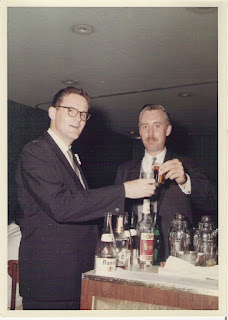 My Dad and my Uncle J at my parent's wedding reception where they kidnapped rolling bar cart from the bartender.  Can we all just agree rolling bars are a thing that needs to come back into fashion.  Especially for IEP meetings and Parent/Teacher conferences. #TeamQuirky, this is what would make America great again.  Just sayin'.