People can really suck when it comes to all things autism but you probably knew that already.  The worse thing is when they leave. Parenthood stuff is tricky enough.  Sprinkle some autism on to it and watch what happens. People that were a constant in your life start to scatter like roaches when the lights get turned on.  If you are sitting here reading this and think "That's not true.", you are one lucky person.

Because I haven't met an autism or special needs family where this that hasn't had this happen to them yet. So much runs through your heart and mind when they leave.

When they leave you don't even realize right away that they are gone.  It's such a subtle slip into a new reality.  You find yourself very overwhelmed with Autism, therapies, IEPs, school stuff, and just life in general that you find yourself thinking "Hey, I haven't heard from "So and So" in ages." If you are like me, you blame yourself for that.  That you got so wrapped up in all things Autism and your kids that you killed that friendship.  The invites dry up.  The phone calls and text messages don't get returned.  You kick yourself for saying "No" one to many times for gatherings "because Autism".  You find yourself going over conversations in your head where you went on and on about Autism and you are kicking yourself for not just shutting up and asking about them.

When they leave because just being in our presence is uncomfortable for them, what the hell is that? Do they think that they are are going to catch Autism like a cold? I've notice this happen with people we know and even out in public with perfect strangers.  They notice, they give us "that look" and they suddenly get the Hell out of dodge, or the playground or to another table at McDonald's. You think I didn't notice? Trust me, I did.

I think the worst part when people disappear from your life with Autism is that they are usually the very person you want to call to confine about this happening to you. You still want to lean on them because you are hurt even though their disappearance is what hurt you.  Does that make sense?

The longer we live on "Autism Ave", the smaller my circle of friends has become and 90% of them usually have a #TeamQuirky kid of their own.  So they get it if it takes me five hours to answer a text message or have to cancel plans again "because Autism".  My Kiddo is rapidly growing and he's no longer the tiny hyper toddler with the chubby cheeks and big blue eyes whose cuteness could bring about a few chuckles and a smile.  Now it's "What's that dude doing over there scripting from Blue's Clues?" Maybe because so many leave, they forget these kids grow up to be Autistic adults.

And I'm also sure some left simply because I probably pushed them away.  I know my boundaries with stress but I am really shitty at expressing that I am at my limits. I use sarcasm when I should have used compassion. I rolled my eyes when I should have just listened and give the person some of that eye contact that BCBAs are ALWAYS going on about.  I lashed out and done the worst offense, tried to top their pain with the martyr Olympics.  "Oh, your kid talked back to you? Well I'd just be happy if mine could talk at all!"  Ugh, why do I do that?  Ain't no trophy for it, so it's just fecking stupid.

And if you made it to the end of this post, I'm glad you didn't leave. So thank you for that. 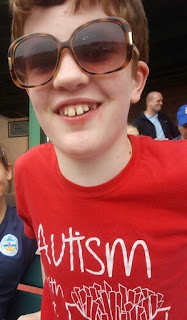 You want to leave all this?  Your loss.