Today I had my annual mammogram. A month later that I was suppose to because once again, even my boobs get to feel the effects of autism, anxiety, and meltdowns.

I was a good girl and made my appointment as usual. I don't mess around with missing the lady bits doctor.  I could lose a limb and I would simply stick it back on with duct tape under the excuse "Well the Kiddo has OT later and my husband can't take off of work to take him."  Killer cramps and hormones, I keep those bitches in check. Plus, it was a trip the gyno that first made me face the reality of my own mental health needs.  You can read about that here.

But what happened? Kiddo left his mark on me. Literally. Several in fact.  Three days before I was scheduled to go Kiddo had a horrible meltdown. There was no talking him off the ledge. No redirection I could give. It was one of those where I just knew "Well, this is what we're doing for the next hour or so." I was alone with him, so I got the brunt of it.  My arms especially.  Scratched and bruised so badly.  He kept grabbing my arms with a force so strong. Eventually I wound up locking myself in the bathroom to get away from him because he was hurting me. I found myself calling my husband at his job and asked him to come home, which luckily he was able to do.  In the time it took him to come home, we had a brand new hole on one of our walls and the Kiddo broke the door to the bathroom trying to kick it down to get to me.

What I did not know till much later that night as I was getting ready for bed was the number of marks he left on me.  Some of which were clearly hand marks. You could see where his fingers gripped me.  I was a walking bruise. It wasn't till the next day when I got my phone call reminder about my annual mammogram coming up when I realized "Oh Shit, someone is going to see all this!"

I could easily hide the damage with shirts but during a medical exam where you aren't weren't anything above the waist, yeah, that wasn't happening.  How the heck could I explain it?  It wasn't just one or two marks. It was a crap ton. It was the kind of bruising where you might ask a person "Where you in an accident?" or worse "Who did this to you?"

Now please tell me, how the Hell am I suppose to tell someone it was my child? Especially someone in the medical community. Let's also remember, Kiddo is my height. He's got man hands now.  So these marks weren't small. I either tell them my kid did this and have to deal with all those questions and a possible phone call to child protective services.  Or I say nothing and have them assume I was assaulted or maybe something terrible like my partner or spouse had beat me.

I found no other choice that I could make other than to call up and pretend to be sick and reschedule. I purposely made it a month from original.  Plenty of time for my arms to heal but also hoping that I don't wind up having more added to them.

We got lucky. He hasn't had a meltdown since that day.  My arms healed. I was able to go and get the tatas tested.  No weird questions or looks. Just the usual chit chat with the tech about nothing special while we both pretend she's not shoving my boobs between to two cinder blocks.

It's one of those things where it just feels so surreal. I'm all about advocating for my Kiddo and autism but there are some things, where do I even start?  How do you explain in a sentence or two that your child injured you and that's a totally normal thing for it to happen in your world?  I'm not looking for sympathy about it. I just want to be able to share what happens in our lives because I'm really, really, fecking sick of not talking about certain things.  People want the shiny rainbows of autism but it's not always something cute in a sound bite that you can share on social media and feel like you did something because you shared it.

I'm never going to be one of those people that tape their kid's meltdowns and puts it on the Internet under the guise of "awareness" but I'm sure as shit not going to keep quiet about them.  Guess what? When he has a meltdown, we all do.  One of my pals who's an autistic adult once told me "You get to be autistic by proxy." You know what? He's absolutely right. Here I am with injuries that I got during a meltdown that I don't even know how to begin explaining to someone outside of this world.  Geez Kiddo, if you feel this cut off from the world with not being able to express yourself, it's no wonder how mixed up that makes you feel all the time.

So yeah, don't tell me my world isn't ruled by Autism because in my many years of experience this is just one more example of how it is. 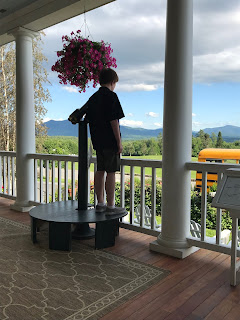 Life with the Kiddo. Get on board or get left behind.

Posted by Eileen Shaklee at 8:19 PM