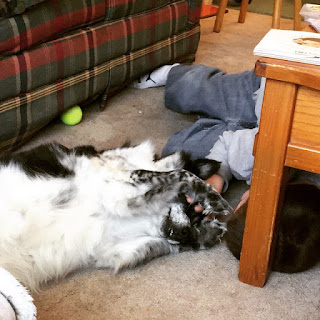 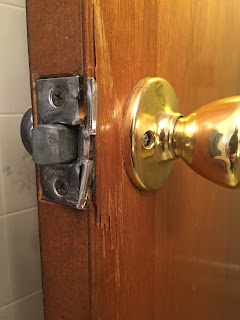 And that wasn't even the end of my day.  That was around 2PM, when my son decided to beat down the locked door to the bathroom where I was hiding to keep him from smacking me.  You see, meltdowns around here have not been fun.  Well, not like they ever were a hoot but Kiddo has decided it's just dandy to spread the misery and I am the subject of his rage as of late.

Oh I know what some of you are thinking?  The "How did that happen?" or the "What did you do?".  Cause there's always has to be some reason why stuff like this occurs.  Making sense out of autistic meltdowns as to help you from keeping them from happening in the future.  Well today's rage fit was brought on by an old DVD player that finally went kaput.

Now we are a #blessed family and have more than one DVD player in our home but in Kiddo world, he had to watch his DVD of choice in HIS room on HIS player.  It was one of those "Autism Rules" I can't mess around with, despite me pleading with him to try to watch it somewhere else.  Not good enough and combined with me insulting him with the suggestion of watching it in another room, well he just had to remind me who's the boss around here and it is clearly not me.

As I sat in the bathroom watching the door shake from his pounding, I found myself wondering the say thing again and again.  How?  How did we once again get here?  How am I supposed to just ride out this rage one more time and NOT have it affect me in the long term? That's getting very hard to do.  How was it possible this was the same Kiddo who just a few hours earlier was so sweet and kind to one our dogs who is nursing an injured paw?  How did he go from laying on the floor gently petting the dog to pounding his fists on this door till he busted the lock?

How did my mom know then was a great time to stop over to drop something off? I don't need to know the how, I'm just glad she did.   It was enough of a distraction to get him to snap out of his rage.

She offered to watch him for a while but it was the first time I didn't really feel comfortable with it.  Not because of her but because of him.  I didn't want her to be the subject of his rage if the meltdown came back.  Cause I have been around when then that has happened.  It's like he just recharges a bit and goes hard back at it again.  Plus, I felt like it would be only reward his behavior.  "Freak out on Mom so bad that you leave her bruised and break down doors.  Win a free trip to your grandparents house where you know it is the headquarters of spoiling."

Then I watched him try to "fix" the door.  He became very fixated on it.  I wondered if meltdown round two was coming because it wouldn't "fix".   Luckily by then it was time to leave for speech therapy.  I was quite tempted to bring booze with me for his therapist as a precautionary.  I warned her from the start it was a rough day and one hour later when she walked back out with him it was clear by the look on her face that she had earned every penny of her paycheck during that session.

How I am supposed to keep doing this?  How am I supposed to act like this stuff doesn't bother me?  How is this rapidly growing Kiddo going to function if I'm not around?  How do these types of setbacks keep happening?  How can we go from peaches and cream to crap in about two seconds?  DVD players break.  The world is just cruel like that Kiddo. How about an early bedtime tonight?  You're gonna be up at the buttcrack of dawn anyway.  Yeah, I think you and I both need that this evening.

Cause I'm not sure how I'm going to do this all again tomorrow with a smile on my face.