Make your peace with autism

You know, autism awareness is dandy but I think we all can agree that autism acceptance is even better. Perhaps I should save this post for April when good old Autism Awareness Month is around but 1) I'm not one for playing by the rules. 2) This post would have to compete with a flurry of puzzle piece memes and lights of various colors (Cause no one can agree on that as the autism community debates are like online gang wars for turf rights.) 3) Because I felt like writing it now. So there. Pfffft! *sticks out tongue*

Still wondering why I am choosing to do this now?  Cause I practice "Make My Peace With It" as a religion. Seriously. There are thousand things about autism and all it's quirks that I have to make peace with daily. I might as well declare it a religion as opposed to a philosophy so I can get those sweet tax breaks.

For example, the Kiddo often tells me about things that have happened sometimes weeks or months later because it is only now that he finally could organize his thoughts and speech together to do so. I feel like I am always running behind knowing what's going on with him but I made my peace with that because there was a time he couldn't tell me anything at all. So he tells me how the art teacher was out sick one day in December in February and how his class had a substitute teacher instead. He did it in his own time and in his own way.

I've made my peace with what other folks will think of me and what I do to provide support and treatment for my Kiddo and his autism. I don't care if you decide to feed your kid only bean sprouts and listen exclusively to ukulele music for an autism treatment. That's your business. I would not insult your choice of autism parenting. that's on you. Not me. Do me a solid and do the same for others.  That's how you can make peace with that.  See? It's not hard. Telling someone that they are disgusting or abusive because they chose a treatment method you don't agree with, you're an ass. Plain and simple.

Yes, I am aware of the irony of me judging you for judging. Consider this. Do you want to sound smart? Then don't sound like an enormous douche canoe.

Next, the waiting. There is so much freaking waiting with all things autism.  I will not lie.  That waiting and being patient shit is not my forte. Never has been and yet here I am with the autistic kid. Talk about a freaking daily life lesson of having to make my peace with it.  Waiting for him do a thousand different things that other neurotypical kids did ages ago.  Waiting for doctors to call back. Waiting to make sense of insurance stuff.  Waiting for emails from school. Waiting in waiting rooms for therapies and then waiting to see the effects of said therapies.  Oy vey!  The waiting! I'm waiting for when I snap.  (True confession. I have already. Lots of times. Hey, I'm human.) I have to make my peace with waiting and that's a daily struggle. The payoff now and then is what reminds me the waiting is worth it.

Then there will be people pissed at you for not having made your peace with autism. Mostly autistic adults who read blogs and social media posts about autism and I really can't blame them for being mad about what we parents might be going on about.  I mean, think about it what it looks like to them. We probably come off like a bunch of asses. It's also probably really hard for them to properly communicate what it is they go through with their autism or what our kids might be going through because they get it. Couple that with their own communication challenges (You know, the ones our kids have.) and Theory of the Mind issues (You know, the thing where our kids have trouble seeing and understanding another person's perspective. That doesn't go away with adulthood.), well, some social media slap downs will occur. As I said before the autism community can't even agree on a freaking color to celebrate autism awareness. So there is bound to be debates, fighting and straight up "Beotch, let me tell you about yourself." moments online.  I've made my peace with that.  Someone will always be there to disagree with me. Sometimes that person is even yourself! That's okay though. It is what it is.

What helps me feel that I can be okay with all this autism stuff is just remember this is all a process and a practice. Ever changing. Sometimes I will be all "WTF AUTISM?!?!" and other times I'm just going with the flow. The scheduled flow that's laid out very carefully in the morning that is. ;-)

Peace out #TeamQuirky. We're gonna be okay. I once made my peace with the idea that the Kiddo was never ever going to be able to write. This year he surprised us big time by not only doing it BUT wanting to do it. So you just never know. 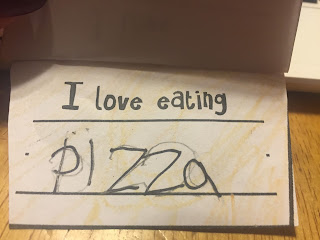 Clearly I need to make peace with the idea that the Kiddo has no respect for the blog brand. "I love eating pizza." What the Hell Kiddo? No fries?!?!

Posted by Eileen Shaklee at 7:00 PM