Talk is cheap. Dental work under sedation is not.

If you follow me on Facebook, Twitter or Snapchat, you know yesterday was the day of the BIG DENTAL EVENT! The Kiddo chipped a front tooth on his iPad. (Yes, you read that correctly.) This, combined with a lifetime of wrestling matches to brush and dental cleanings that often required three or more adults to hold him down, we were welcomed into the wonderful and expensive world of sedation dentistry.

Not gonna lie, I was nervous and perhaps a tad annoyed that we even had to go this route. I mean, this Kiddo of mine has been know to put anything and everything in his mouth EXCEPT a toothbrush. Flossing? And then she laughed and laughed and laughed. This was a situation that never got better. Just zippo progress. Not amount of social stories or modeling could get him through this. There's really no choice in the matter. It's what had to be done. So appointments were made and off we went to get to the hospital by 6AM. Cause telling the Kiddo that he couldn't eat or drink till his appointment was going to be rough to say the least. It was best to just be able to roll out of bed and go.

This proved to be the start of the running theme of the Kiddos limited verbal abilities and how kind of misleading they can be to the average Joe that encounters him.

"What do you mean he won't understand that he can't eat or drink before the appointment? He just sang the song "Bird is the Word" perfectly for me."  Yeah, about that. There's the a difference between expressive and receptive communication. Speaking and understanding, BIG huge difference. I have talked about our personal struggles with it here. You should read it if you haven't. Don't worry. I'll wait. I'm trying to beat this level on Candy Crush Soda Saga anyway. "At least your kid talks"

You're done? Super! Okay, so where were we? Oh yes, him talking and making all the medical staff just fall in love with him. Which he did. The whole floor was staffed with middle aged/older ladies nurses. Kiddo loves him some cougars and the cougars love them some Kiddo!

"How's his pain level?" Ummmm, your guess is as good as mine. Just because I can translate some things that he says, doesn't mean I am completely fluent in "Kiddonese". I was asked this multiple times yesterday and although it was met with the token sympathetic head nod on their part, I have wonder if they actually get the amount of frustration that comes with it. Sure, it's great my Kiddo can tell you the number of every hotel room he's ever stayed in. (Regardless if you asked that or not.) Expecting him to tell you what's hurting, not gonna happen. Ever. I can't help but be concerned how this will affect him medically down the road if I am not there. Despite my "I can't ever die" plan I have going, some day I won't be around. Or what if as he grows older he pulls the "Oh Hell no. You're not coming into my medical appointments." Now that scares me.

"He seems so happy!" Yes, at this moment he is. You gave him a gown and fuzzy socks and told him he could run around without his pants. Who wouldn't be happy with that? No school today AND no pants? Well that's just my Kiddo's jam! He doesn't fully understand what's about to happen though. Despite all the prep work that went into it. The comprehension of it all isn't there. Even though you thought it was when you said "You'll just take a little nap." and he smiled and said "Hibernating! Like a bear."  The rest of it? NOPE.  But you laughed, so he laughed and said it again because twice is always funnier in #TeamQuirky land.

Coming out of anesthesia is rough for any kid, add autism and it's all whole new level. He cried for hours and I could just tell he was convinced this achy and loopy feeling way was permanent. There was no settling this emotional meltdown and we had to just ride it out. A large part of it was him plopping all ninety nine pounds of himself on my lap and wanting to be held like a baby, which I obliged even though it crushed my internal organs. I have two kidneys. He can squish one. No big deal.

It's always a case of being this Kiddo's translator and sometimes I wish the autism didn't play a part in some of the things we have to do. It certainly can complicate things but it also allows me to really seeing run of the mill situations in a whole new way. I do love the different perspective. I just wish it wasn't so hard or expensive sometimes.

You'll be happy to know that the Kiddo's surgery went very well and he's now gotten the clearance to eat fries again. :-) 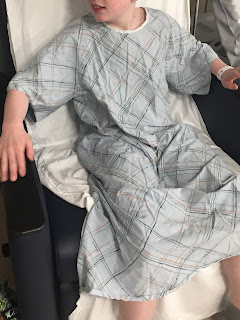 "No pants AND they push me around in this big wheely chair? Hospitals rock! Oh wait, what's that OR room they're bringing me into???"