Toward the end of ESY (Extended School Year) aka "Summer School", we had a bit of a major setback with the Kiddo, his anxiety, and school. It was a real shock to our system because for five weeks stuff at school was great. We got some nice emails from the teacher about how he was handling the new school and adjusting to life at the middle school. Then our old enemy "Anxiety" showed up the last week and it all hit the muthaloving fan. Who the Hell invited that guy? Seriously, Anxiety, you can't sit with us. 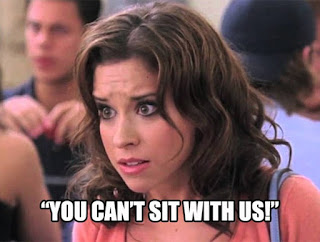 I don't even care if you are wearing pink on a Wednesday.

How it was handled there wasn't ideal. In fact, it sort of sucked. It was a recipe for a clusterfuck though. New people that did not know him and his previous work. Stuff that he used at his old school to help self regulate and calm was not available at this one. I think six weeks of not having his comfort items and all the newness took it's toll and the Kiddo went HAM with the attention seeking behaviors. The more I reflect on it, the more I know these behaviors were his only way to draw attention to himself for being so miserable and unhappy and unsure of everything. This is where the communication disorder in autism is a bit of a bitch.  Why say "Mom, I'm really upset at school." when throwing blocks across the classroom is in your wheelhouse?

So we have had since a flurry of emails, phone calls, and meetings since the big blow up. We're trying to get all the steps in place for him for when school starts up again. I'm not gonna lie. I am freaking out about it and wish I could go back in time and send him to his old elementary school where he was King of the joint. Everyone knew him and more importantly knew his triggers and how to redirect him.

Yesterday they had a "Welcome 6th graders" pizza party at the school.  It was for all the incoming students to come and get a tour of the place, mingle, and in general get a little more used to the place they are about to attend for the next couple of years.  No parents allowed.  I really wanted him to go.  I wanted the Kiddo to see his pals from his old school from the typical classes.  Even though he had been in the building all summer, it was going to be a whole lot different with way more students and staff in it.  I thought it was a good way to get an idea of what that would be like for him. This middle school would also have a lot more students that he hasn't met yet coming from other elementary schools.  I wanted them to get to know the Kiddo. See what a swell guy he is.

Even though he was scripting like a mofo, I still took him.  I still dropped him off to the caseworker that was going to shadow him.  I told her I would hang in the parking lot and it was a good thing I did.  Forty minutes my cell rang and I could hear the Kiddo hollering like a banshee as a staff member said "Yeah, we tried. Come get him."  And so I did, with my sunglasses on because I did not want them or him to see the tears in my eyes.

I don't know if it was too much for him or the fact that he knew it wasn't a real school day or the alignments of the planets or because I didn't perform a animal sacrifice.  Perhaps it was just because of autism, which is most likely the best explanation.

And like any good meltdown, he had to peseverate on it for hours.

And like any good autism parent, I kept reminding him that the activity was done. The event was over. "Moving forward!" On to the next thing.

But in my head, I am still obsessing over it. I am trying to figure out what went wrong and how to avoid it in the future. I am convincing myself that this school year is going to be awful.  That all the hard work that was put into the Kiddo all his years in elementary school are gone.  My stomach is in knots at the idea that the school will be calling me every day with another complaint about his behaviors.  They think the logical thing to do is to call me like I have some sort of magic secret solution to all this that I am keeping from them.  Trust me school, I'm not. This is where we both need to agree that we both don't always know what to do.  This is where you at the school just have to power through some of his shittier behaviors because at the end of the day, that's all we do here in this house when he has them when nothing else works.  Welcome to our world. It sucks sometimes.

I'm trying to remember to move forward.  I'm trying not to dwell in the much here.  I'm struggling here. Some problems can't be solved by ordering another side of fries. Some problems are only tackled by powering through and moving forward.  Like a bulldozer.

Middle school, be patient with my Kiddo.  There is a reason so many people love him.  He's freaking awesome.  Just move forward with him.