I was sitting there on a Friday night looking at my last few blog posts and thinking "Geez, these last updates are kind of dark.  Kind of a bummer.  Sure hope I can get back on track with writing something funny again.  Something that might make another tired autism parent chuckle.  Spread a little joy into the #TeamQuirky world."

And with that the good Lord above looked down upon Mama Fry and said "Gurl, don't worry. I got you." and sent the following email exchange to the message box on the Autism with a side of fries Facebook page.

And it was good. 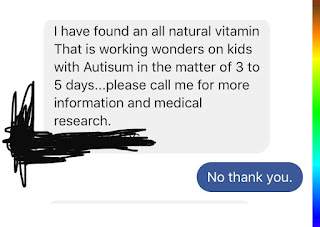 The name and phone number of this person has been blurred out to protect him from his own stupidity.


Now this is a typical message that I get pretty much every other day. I wish I was making that up.  I wish I could say this type of sales pitch that preys upon parents who are grief stricken and confused is the rarity.  Sadly it is not and before you all jump on me for "Hey, you should give it a shot you don't know." I clicked on this guy's Facebook profile and saw he was a sales rep for company that is well known for it's high pressure sales tactics selling bullshit snake oil.   Hence my "Move it along, Buddy." reply. I don't want my time wasted and I'm gonna do this guy a solid by not wasting his.  Which is kind of nice of me because I'm sure he just copy and pasted this to a ton of pages.


Apparently being direct wasn't jiving with our fine friend.  He had a quota to fill, I mean, a point to make. 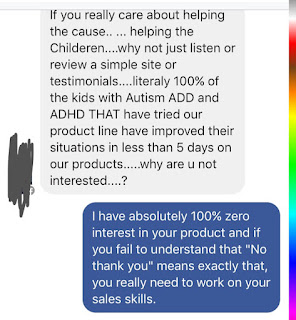 Heaping on guilt. Wow, you must make A LOT of sales.


That's right folks!  I don't care about the cause or the children!!!  It's not like I have been tearing my hair out advocating for my own child this past week at school or....oh wait.... Well I certainly didn't work for nearly nine years with autistic and special needs children or anything...wait a minute...I did.  Oh I know, it's not like have been blogging for four years on this topic and created a global community so 70 thousand people can feel less alone or anything...Hold up.  Call me Britney cause Opps I did it again because I have!  Hey, I know. It's not like I have raised funds for Autism New Jersey by partnering with Spectrum Designs Foundation (A group that employs autistic teens and adults.) on a line of t shirts.  Well dang nabbit, looks like I did that too.   Hmmmm, it almost looks like I care.  Better make sure I'm really clear about the fact that I don't. 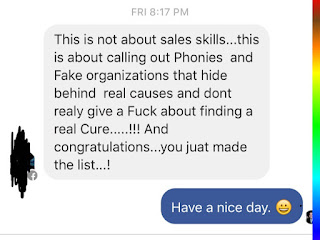 You hear that Temple Grandin?  I made THE LIST!  Are you on it? No? HA!


I suspect the name of "the list" is "People who won't help me make money by exploiting their kids."  If so, I'm happy to be on it.

This is the point of the exchange where I realized that I have met this guy before or should I say, his type.  Several times over in fact.  Mostly my college and 20's when I was single.  He'd buy you a single four dollar warm beer and thought he OWNED you for the night.  God forbid you were direct and told him you were not interested, you were either accused of being a prude, a bitch, a slut or a combo of all three. I didn't put up with that crap then and you better bet your sweet ass I sure in HELL won't now especially when my child is involved in the equation. I bet this guy gets LOTS of dates and by that I mean, he is FOREVER ALONE.

I, of course, had to get the last word in.  If he was going to think I was a bitch, I best prove it. With a smiley emoji because I am thoughtful as feck.

"But Mama Fry!  He believes is his product! You shouldn't publicly shame him so!"

But you see I didn't because it would have been SOOOOOOO easy for me not to blur out his name or his phone number.  I don't know if you noticed but the folks that follow this blog, I both love and fear them.  They are like the mafia.  You send one of theirs to the hospital, they'll send you to the morgue.  I have a feeling that dude's voice mailbox would have filled up quickly and NOT with sales orders.

You see buddy, I got a list too and you and the snake oil you sell are on it.