It's okay to feel frustrated.

Last week Kiddo and I were co CEOs of Frustrated Incorporated.  It was a weird week.  After a four day holiday weekend, there was a whole lot of Monday in our Tuesday.  Kiddo was NOT. HAVING. IT. I was kind of discouraged by that but tried to brush it off as just going back to the routine after four days of doing whatever he wanted.  Then Wednesday was here and I kind of had a little hope it wouldn't be that bad this time because there was a school wide trip to a local kid's museum.  Maybe we could skip that whole WTF Wednesday/let's rush the whole day to get to the thing he wants after school (music therapy).

Nope, it's like I was new here or something. He proved WTF Wednesday is portable and took that meltdown show on the road.   Two solid days of misery.  Surely we can just get back in the saddle for Thursday.  We never see behaviors on Thursdays at school.

WRONG!  Wrong again Mama Fry.  Kiddo decided that he really needed to obsess on getting to school on Thursday and do nothing other than running on the gym treadmill.  (Which is an activity he "works" for. It's his idea of fun.)  So he had gobs of behaviors about that on Thursday and I really was scratching my head at this point thinking "What the Hell is with this week????"  Three in row.  We haven't had that since his days at the old awful middle school.

Friday was better but not perfect either.  Lots of anxiety. Lots of grabbing.  I can't figure out what this is. I don't think there will be an answer to his anxiety or a solution on how to solve it. It's driving my around the bend and I can't help but think if I'm ready to rip my own hair out, he must feel even worse than I do.

All the stuff that we do to help him, I am seeing that all it does is make things worse.  He can't "work" for anything without that becoming part of the behaviors. He starts to fixate on the reward so much that it consumes him.  It already was hard enough to find things that motivates him. So little does. To have these things then become part of the problem makes me feel like I'm banging my head against a brick wall.  We ask for help and this is what we get and it's only compounding the problem.  What are we suppose to do here?

And just when I think we have a clue to the problem and some solutions to nipping stuff in the bud before it starts, he manages to find a way around that too.  It's like he's looking to be miserable.  There is just no other way to explain it. We try not to tell him about big events or switches to the schedule because he gets so fixated on them.  So if we say nothing special is coming up, you know what this kid does? He'll take a run of the mill thing in his routine or day and turn that into the big special thing and fixate on that instead.  It's baffling.

Plus there is the stuff we simply cannot hide from him that he will always obsess on, like birthdays and holidays. I can't exactly surprise him by hiding Christmas or his birthday. Did I mention he's twelve?  So yeah, let's add moody teenage hormones to this mix.

His other big behavior when he isn't in a mood is to just scream, growl, roar and yell.  ALL. THE. TIME.  Constantly. Yes, constantly. He's getting some sort of sensory input from it as well. I have yet to find an appropriate replacement behavior for it. Planned ignoring doesn't work. Addressing it doesn't work.  Mommy losing her shit about it and yelling at him for yelling doesn't work. (Yes, I'm aware of the irony but every Mom has her noise limit.)

I won't lie. It's hard to keep finding the silver lining the longer this stuff all goes on.  When you have a kid who's hobby is waxing nostalgic on all the times life has disappointed him and prefers to find ways to stay focused on frustration, it's hard NOT to join him in that feeling.  And when he's not doing that, he's just screaming so much you find yourself wondering "Is it possible to sprain your ear drums?"  The two moods this week were miserable or screaming like Ozzy Osborne on a bender.  It's stress on a shit sandwich.

The only thing I can do is just own the fact that it's okay to get frustrated with autism. It's even okay for me to feel frustrated with him.  I'm a parent. He's the kid.  That's a tale as old as time. I'm not the first mom that's thought about selling her kid to the gypsies and I won't be the last either. So no, I'm not going to feel guilty or stay stuck in that feeling for long. 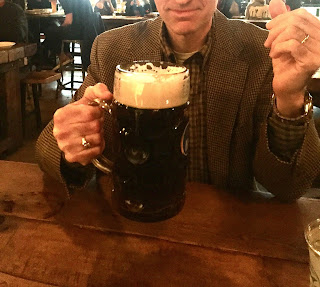 On Friday my husband made the very wise suggestion we eat out at a local beer garden. That idea was more than okay. I married a keeper.

Posted by Eileen Shaklee at 7:27 AM