Kiddo and the new school. An update.

As some of you long timers might know, Fall of 2016 was the year of DRAMA with school and the Kiddo. Long story short, we wound up having to switch schools mid year.  We were really worried about it.  It meant touring schools with him in tow and trying to find the magic combination of one that would take him and one that would suit him best.

We got lucky and seem to have found one that is providing what he needs and more importantly, he likes it! I just realized the other day that almost three months have gone by and I found myself thinking about what's changed. For the most part, it's been steady on progress.  Both academically and behaviorally.  I would even say socially he's a bit more engaged lately.  He scripts a lot about the different staff members there. He even started to wonder what do they do when all the kids go home at night and delights when I say the same answer of "Home to their families! They don't live at school!"

It hasn't been without hiccups.  A few weeks ago we had to make a transportation switch. Kiddo was just not doing well on a bus full of kids just like him.  It seemed to be a ripple effect. One kid would go off, they all would go off. He was butting heads with another kid.  The school and the bus tried various tricks. It just wasn't working. It was suggested the route would be changed but the driver couldn't do it.  It was time to get him private transportation.  Door to door. Just him, a driver and and an aide.

And this was a tough switch for him to swallow because it meant riding in a mini van and not the bus. He really loves school buses. Mainly because they remind him of Thomas trains because they are all numbered.  However, this is what we had to do. I can't have him having behaviors on a bus everyday just because he likes riding the bus.  I didn't sugarcoat it with him.  "You're going on this mini van now to school. Sorry that bums you out but we can't have that behavior on a bus."

It's been two weeks now with the mini van and I have to say, that's been going really well.  I asked the driver "Well, how has it been?" and he told me "He's been awesome. I don't know what behaviors you are talking about. He's been great!" (I had given him a heads up about "WTF Wednesdays".)  I noticed his anxiety on Wednesday mornings before school has lessened too.  So maybe this was a step in the right direction.  If it helps having a shorter route for the Kiddo to go to school, maybe that's something that they can arrange down the road for him to be a on a bus again with other kids.  I also know realistically that's what I want for him too. He's not going to be driving. He'll always need some sort of transportation and it most likely be with other people.  It's something we'll have to tackle with him. Learning how to cope with longer rides. Dealing with other people's behaviors and reactions to his.  We'll get there. I'm just happy that this current "Well, let's try this and see how it works." actually seems to be working.

His school does a lot of trips that focus on independent living skills. I love that they do that. He has to make shopping lists and has a budget. (They have them buy all their snacks for school.) He has to find what he needs in the store and then bring it to the cashier.  Then they all go out to lunch and he has to order his own food.  (That part has been his favorite. If he had it his way, Kiddo would eat out for lunch every day.)  They work on laundry skills and cleaning too. He's been showing off his prowess with vacuuming.

Another part that makes me happy is all seeing the academic work that they do.  It's clear to me this teacher follows the best rule about autism, "Presume competence."  They do social studies, science experiments,  spelling tests, etc.  All the stuff any middle school student usually does.  (And in his case, all the stuff that his old middle school wasn't even bothering to do.)  He has homework again! He grumbles like any 12 year old would about having to do it some days, but hey, I'll take that milestone.

My favorite part is that they have put this Kiddo to work.  A busy Kiddo is a happy Kiddo. He has a job at their school store, which sells snacks and drinks. He loves it!  I like to ask him "What was the hot seller today?" and he usually happy to report that Cheez Its are still the big seller. On Thursday the teacher had him delivering flyers to all the classrooms in the school and he loved doing that because it meant also getting to do his favorite hobby, wander the halls and saying "HI!" to everyone.

We still have bumps and bruises.  It's not perfect but it's progress.  I feel a lot more hopeful than I was a few months ago. Fingers crossed that this feeling keeps up. 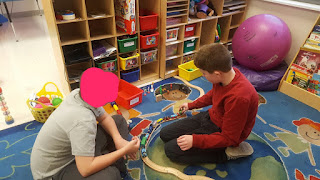 Kiddo chilling with a classmate over a mutual love of trains.

Posted by Eileen Shaklee at 8:20 AM