"The things your think are precious

Reelin' in the Years by Steely Dan

We've been dealing with an anxiety upswing for a few weeks now.  It's gone from being the current crisis to the new normal. I can't say I'm too happy about that. What else can I do though? It's not like I can just ask or order Kiddo to switch it off.  How much do you calm down when someone says to you "Calm down!"?

I'm constantly on edge with the Kiddo and how he is feeling.  He can go from happy and giggling to full blow anxiety pacing in under ten seconds.  I'm finding it hard to keep up momentum. Always having to be "on" is exhausting. It's like playing one of those arcade games of "Whack A Mole". Squash one problem, another one pops up. It never ends.

The only thing that we had going for us was that at school, he was fine.  They really didn't know what we were talking about with the panic attacks.  I was grateful for it.

Wednesdays are already traditionally tough in the House of Fry.  For reasons we do not fully understand. I've dubbed them "WTF Wednesdays" long ago.  So my husband is away overnight for a convention for work.  Then add the Kiddo's teacher, who he loves, is out for the week.  Yesterday was also her birthday and her not being at school so he could sing "Happy Birthday" was the tipping point for the Kiddo.  HE LOST HIS SHIT.  There is no other way to describe it.  That was just too much change for the Kiddo.  Dad being away and not being able to wish his teacher a happy birthday switched on the "HULK SMASH" feature of his brain.  Did you know that desks were aerodynamic? Let's just say Kiddo did some aggressive rearranging of the furniture of the classroom.

His school being his school didn't call me though to tell me to come get him. They dealt with it but they also knew that this wasn't him and called me to say he had a "rough day." (And I have to love them for calling it that.  Just a rough day when you throw a desk or two. No big deal. Makes you wonder what the Oval office looks like right about now with all those rough days there.)

It was clear talking to them that they too have seen what Kiddo is clinging to the most lately and that is his schedule. Any changes without his expressed written permission, well, it ain't gonna be pretty.  This is the one thing lately that I can't get why it's become so rigid with him lately.  I mean, I'm all for routines.  I love them too.  Kiddo was able in the past to be more flexible with sudden changes.  (Like someone being absent or adding a stop to a list of errand running.)  Now, if it's not written down in his notebook which lives on our kitchen table, it does not exist in his world.  He has to have things in their order and he looks so damn content checking them off as he does them.  It's so precious to him and I can get that even though I kind of still don't. (Does that make sense? You know what I mean.)

There are some good things with this notebook.  He's written out his whole morning routine that I no longer have to say a word to him to do it.  He's getting it done.  So, that's a nice trade off.  Of course, it comes with him getting up earlier and earlier lately so he can run out to his notebook to check off "wake up" off his schedule every morning.  Earlier wake ups lead to more free time in the morning which would be fine if he wasn't tapping his foot waiting for the world to hurry up so he can check off the next thing on his schedule.  I won't lie.  This behavior of wanting to rush through everything is driving me bat crap crazy and let's face it, I didn't have far to go.

Knock wood, the new normal of barfing all the time has been better but he still has moments of it.  Even though today's schedule was a school trip to a mini golf center, he was looking a little sweaty. A little off.  I gave him an anti nausea medication just to be on the safe side so I wouldn't get the phone call of shame from the school nurse.  He settled and seems to have had a good day.

My pal "A" always says "we live in moments" and that's pretty much all we can do right now. If the moment is good, enjoy it. I know how quickly it can change.  The good ones are precious and I hang on tight to them. 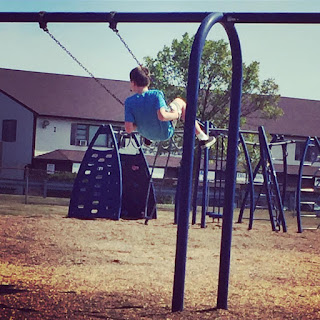 Posted by Eileen Shaklee at 8:05 PM