The break is breaking me.

I will admit it. I'm not just a mother.  I am what can best be described as a "Smother" (Props to my Kiddo's speech therapist for turning me onto that word.)  He is my only kid.  Add autism to boot and I hover over that kiddo like nobody's business.  I am hyper aware and probably more anxious than him in new situations.  I am always living in a state of perpetual freaking out.

The older he gets, the more I realize this behavior of mine is not doing either of us any favors.  Despite my plan never to die. (My current plan for the future. Rational, right?)

No time like the present to start pushing both myself and the Kiddo outside our comfort zone though to start building more independence.  Inspired by one thing.  This winter break which is going to break me.

I get it. He's off his school routine where every minute of the day is planned out up to and including when he goes to the bathroom.  There are also no therapies this week because those folks are selfish and want to spend time with their families. Pffft. Whatever!  So we got the perfect storm for a meltdown brewing daily just hovering over the house every single day.  Add the excitement of "SANTA!" and tons of family gatherings with folks that don't always get the #TeamQuirky lifestyle. ("You brought a Happy Meal for his dinner???") I guess you could say that both the Kiddo and I are out of fucks to give.  It's now Wednesday... Gawd! It's only Wednesday?!?!  Crap! I still have a lot of week to fill up.

I found myself online yesterday researching day camps for breaks.  Cause despite me setting down some plans for the boy this week, it's still not enough for him.  Even scheduling "Okay, now we're going to have iPad time. Or DVD time. Or play with toys time." ten seconds later he's on me like a rash to be his personal cruise activity director.

So what happens then?  He goes to his coping skills.  Stimming.  Which would be fine if it wasn't non stop screaming like a possessed howler monkey who just pounded back a couple of Red Bulls.   And it's not just him screaming. Oh no, my boy is a scream connoisseur.  When he is not shrieking like a banshee for fun and sport, he's looking up YouTube clips of other people screaming.  Perhaps to be inspired or just enjoys the sound. I'm not sure.  It's a sensory thing I just do not get all around.  Meanwhile I can't use the blender in my house to make a smoothie because that's too loud.  Huh?

Just looking up a program where I'm pretty sure he would enjoy fills me with heaps of guilt. Like I can't hang and handle this boy for a simple winter break?  What the hell is wrong with me?  I used to deal with autism as a job before I went pro with the kiddo.  Yep, I signed up for it.  Of course the difference being I clocked in and then after a while, clocked out.

And I know going into each and every break with the Kiddo what's going to happen.  That eventually we will both hit a point where we are sick of each other and just miserable.  It just seems like we hit that point a lot sooner lately.  Maybe if he had a sibling this would be different.  I don't know.  I just know he's needing a structured routine with multiple social interaction that this one mom show cannot provide.

I mention the idea of signing up for this local camp thing (It's all throughout the year) to the husband unsure of how he might respond.  He immediately said "Let's do it." He was ALL IN.

I just sent in my email signing up for more details.  Seems right to do but also scary.  Mostly right though.  Could be great. Could suck balls.  Only one way to find out.  I just know when to hold 'em and when to fold 'em.  I need help.  I'm hoping this can do it. 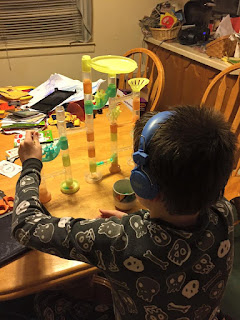 Okay, it's not all screaming. Sometimes he's quiet for like a hot minute.