Since it's the summer, the Kiddo has a much different schedule. While he does attend an ESY (Extended School Year) aka "summer school" program, it's only four days a week and it's only for six weeks of the summer. Which leads to us have a lot of free time on our hands. If you are living the #TeamQuirky lifestyle this isn't the best idea to have gobs of unplanned for time in front of you and a Kiddo who thrives on structure.

So Mama Fry has to keep this boy busy. There are no lazy days of summer at French Fry Inc. As the years have gone on this gets both easier and harder to do.  Easier in the sense where I can say "Okay Kiddo, I have to hit the grocery store, post office, and pick up the dry cleaning. We're leaving at 10AM. You in?" and he will enthusiastically declare "YAAAAAASSSSSS!" like a drag queen who just found out Lady Gaga is working on a new album. He's just always game to do whatever and outings have gotten easier. Or I have just learned enough to make them work. I don't really know. I know enough not to question something if it's working.

But then they get harder as well because Mama Fry here gets cocky. I have a good couple of days with the Kiddo.  He's content and the behaviors are pretty chill and I start thinking BIG! Plus even though the summer goes by so quickly, some days feel like forever, ya know? I'd rather have some plans laid out and I don't want to always take him on errands.  I want to do fun stuff too.  There's also only so many kid's movies, beach days, swims in the pools, outings to the park or runs to the drive thru for "window fries" a gal can do.

What about New York City?

This is the idea I got in my head the other day.  I live at the Jersey Shore. Day trips into the city are easy enough to do. It would mean taking the train in and back. Hello? Did someone say "Train'?  That Polar Express movie watching Kiddo would already be down with this idea just based on the ride in and out of the city alone.

We could easily hop on one of those open air double decker tourist bus and go for a spin to see the sights. He's been on them before and he freaking loves them. They are right around Penn station. Getting on one would be cake.  Hop on and off and go somewhere for lunch.  Another thing that's gotten a bit easier. NYC is a city of hot dog carts on every corner. Feeding him wouldn't be an issue.

So what's the problem?  The flipping bathroom.

He's going to have to go but where? Usually my husband takes him. I, an adult female, cannot walk into a men's room with him. There is no way on God's green earth I am sending him into one ALONE. Oh HELLS NO. Not gonna happen. Twelve year old autistic kid with an intellectual disability and limited verbal skills. All the NOPES that ever NOPED!

So take him in with me to the women's room? Well, that's getting harder and harder to pull off.  For one reason, the Kiddo.  He can read restroom signs and he knows which one he's suppose to go into and what one he's not. Let me tell ya something, for a kid with limited verbal skills he let's his displeasure of being dragged in with his Mama be known. Loud and clear. The rules being THE RULES. There is no swaying his line of thinking.  I've been able to so far to plan some of our other outings around places where I know the bathrooms are single stall set ups, so sending him in isn't so scary.  Eventually I'm going to have to let him go into a big bathroom by himself. Just not planning on starting that at Penn Station in Manhattan which is where he is going to want to go right away after being on a train for a while.

I actually had a moment of "Okay, what guys do I know in the city that could meet us and walk the Kiddo into the men's room so he could go to the bathroom?" and that's when I realized that's probably gonna be hard to pull off.  Really, can you imagine getting that request? "Please come meet us so you can go watch my Kiddo go take a piss."  Yeah, not happening.

And this is when I get angry at autism. Like stupidly, irrationally angry at autism. I wanted to be able to surprise my Kiddo with "Forget errands. Let's go to NYC!" and have him think "My Mom ROCKS!". Instead, I'm stuck on where my son can pee because I worried for his safety. There are just too many risk factors of what could happen to him or what he could see that I cannot take that chance.  It frustrates me to no end that so much of our lives just seems to be ten times harder than most families.  I can whip up invites to a pity party for myself really quickly.  Those parties suck. They don't even give you goodie bags.

I can get very angry at autism.  I'm not proud of that but that's where I am sometimes in my life.  The only thing I can do is try to channel that anger into doing something productive with it.

Like looking up what sit down restaurants are in Penn Station that I could take the Kiddo for a side of fries AND using their stand alone bathroom which I could stand watch over. ;-) Now that could work! 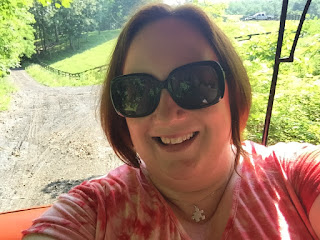 Furrowing your brows just gives your wrinkles and I'd rather earn them by laughing.

Posted by Eileen Shaklee at 8:21 AM