We are entering the Hell Zone time of the year with the Kiddo.  ESY (Extended School Year) aka Summer School is wrapping up this week.  Full time school will not return to these parts till September 6th.  We have no major plans like a big vacation or anything else going on.  Lots of free time and we don't do to well with lots of free time. Traditionally, this is the part of the year where things get dicey.

Plus, we are in a very strange transition phase with the Kiddo.  While ESY at the middle school has gone much better than I could have anticapted, I'm not holding my breath that we are out of the woods just yet.  Sure, he's gotten to learn about the layout of a new building. He's been spoiled in a way because it's litterally two classes of kids there.  In a few weeks, hundreds of other kids will be going there too.  The bell will be ringing between classes.  Lots of new staff and teachers to get to know.  Despite dipping our toes in the water all summer, I suspect we will be up to our noses with surprises and transitions again in a few weeks.

Or he could surprise me completely and go with the flow and be all "What Ma? I'm fine!" even though I won't believe it and will still be on edge for weeks.

He's started to ask about what his jobs there will be.  At the old school, they put that Kiddo to work! Which I loved because a busy Kiddo is a happy and content Kiddo. Taking the lunch orders down to the cafeteria, delivering messages to teachers, sorting the mail in the main office, and stalking his favorite custodian Mr. "T" till he got a turn with the big vacuum.  He more than liked it, he loved it. 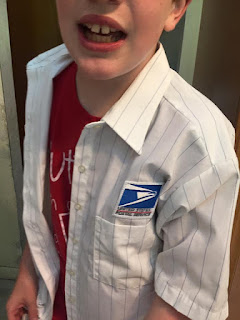 The old school even gave him this postal shirt to wear while he worked and then they let him keep it when he "graduated" because they enjoyed making me bawl over leaving.


Now that's he's kind of in his groove, he wants to expand his comfort zone.  That's awesome but it's also filled with "Well, we'll see.".  Because he is the new guy and no longer the top dog. There may be kids already doing those jobs. We have to see what jobs are available and get a bit more settled.  I tried explaining that to him but it kind of fell on deaf ears with him.  So, he's a bit buzzing about that a lot.

My personal schedule has been a bit all over the place.  My father had a long hospital stay which meant I was running back and forth. It's also left me a bit stressed out and I'm not sure who was happier when he came home yesterday.  My father or the rest of the family.  It's been a long two and half weeks. Kiddo has been pretty good about it all.  Mostly.  ;-) We had a few head to head "Quirk offs" as I call them, where his needs for accommodations and my own clashed. Stuff like this is part of life and although I understand it's a challenge for the Kiddo to put himself in the shoes of another person and their viewpoint, he still struggles with it.  When my own stress level is kind of through the roof, it's really freaking hard to think "Well, this is a teachable moment for him!" and be all jazzed about that.  I just want the Kiddo to cut me some flipping slack already!

The Kiddo lives for "And then?".  That's his mantra. If it was the 90's, he'd have it tattooed around his forearm with a tribal pattern.  It boils down to I have to find an "And then?" activity for the Kiddo every day, several times a day.  Even when all I want to reply "And then Mama Fry has a margarita! Go fire up the blender. I'm going to show you how to make one."

But no bigger reminder that it was August were not one but two calls from school today about his behavior and his anxiety. To say it was through the roof was putting it mildly. This new school hadn't seen him at this point yet, so they sure got a lesson in it today.  Let me tell ya something, there is nothing like getting a call from school asking for help with what to do with your kid.  Because seriously, is there not an IEP and a behavior plan that came with my kiddo?  Did you think I would hold something back?  That I alone hold the secret to his autism and his meltdowns? Cause I assure you, I do not have it. The tips and tricks you seek are all in that nice little pile of forms with his name on it.

No, I did not take him home till it was time TO go home at his usual dismissal time. Cause there was no way on this planet Mama Fry was going to teach the Kiddo "Just have a meltdown at school. I'll come get ya."  NOPE! So on one of these last days of ESY, I too got to spend two and half hours at school.

I'll get through it because what other choice do I have here? I'll also ride out the Back to School transition too because again, it's what's next.  I'm just going to be earning quite a few more gray hairs while I do both of these. 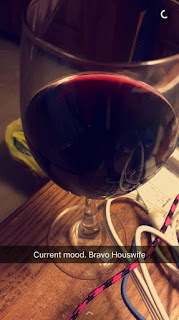 I swear I'm just drinking this tonight for the antioxidants.

Posted by Eileen Shaklee at 8:33 PM