The other side of this.

We had to white knuckle this last week. Some days were good and some were crap and some were "YEAH BABY!!!"  It was a fine example of life with autism in general.  Put out one small fire only to turn around and see two more that just lit up behind you.


My husband and I are in constant state of "Distract and Deflect" with the Kiddo.  We will do anything to keep him mind busy.  Which leaves us both completely wiped out by the end of the day and usually going to bed not far behind the Kiddo most nights.

Speaking of bed, Kiddo has taken to waking up extra uber early again.  I had long since made my peace that my child would never sleep past 6 AM but I found myself wistfully looking back to those days as sleeping in. 4:45 AM wake ups have become the norm.  He's also having a very hard time turning off his brain for the night.  Up for hours in his room.  I guess the only good thing is he does stay in his room but he's as about as quiet as having a bunch of frat boys riding elephants living next door to you.  If he's up, we're all up.

His doctor has tweaked his medications again and we've seen some success with it at school. To the point where the teacher wrote me an email that things seem to be a step in the right direction last week and we felt like "Yeah, we're getting somewhere.". Of course this was promptly followed by some days of not so great behavior due to his anxiety and we're back at square one again.

But we do have some good stuff going on.  Daddy Fry decided that the Kiddo needed a giant trampoline and Boy, was he right about that! (Look at that babe! I'm admitting you were right in print!)  Since we had to take down the old swing set that was falling apart, might as well set something else up over the dead grass. ;-) 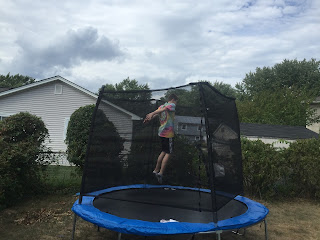 I suspect he'll still be jumping on it even in a snow storm.


And while we managed to get through the week at school with no phone calls, I know we are far from being over this.  We still have a whole school year ahead of us. Every day of holding our breath till he comes home, that's gonna wear on a gal.  It did feel good to exhale when he came home today with a note that the whole school day was great.  The days though with the bad notes just feel like a gut punch.

WTF Wednesday returned with a vengeance though.  How do you go from two perfect days to all the old behaviors popping up AGAIN?? I'm hoping it was a one off. I'm hoping it was just his usual wanting to rush through the day to get to the thing he wanted. (Which is music therapy after school which he hasn't had in a long time due to scheduling problems) But I have really no idea and of course this was a day that the BCBA wasn't in the room to observe him for his FBA.  Ugh!

Thursday started strong but ended rough. So much anxiety over school.  So many attention seeking behaviors that we can't react to because that just feeds into it.  There's a point where I had to just keep biting my lips to keep myself calm from my own panic attack.

It's Friday morning and I just sent him off. He is buzzing with enough nervous energy to power a small city.  I hate that he is feeling like this over school.  Last night I had an emotional conversation with another autism mom who wisely observed how the Kiddo is probably still coming to terms with not being at his old grammar school.  How he is "homesick" in a way for it and he is still slowly processing these feelings of loss. She's right.  She usually is on these things.  Doesn't solve the problem but it certainly puts it in perspective for me.

Anxiety over your kid's anxiety.  How's that for irony?

Posted by Eileen Shaklee at 8:05 AM