Planning to be spontaneous

One thing that the new BCBA noticed about the Kiddo and his behaviors as of late was his fixation on the motivators he was working to earn.  He would get so worked up about getting to the reward that he could not focus at all at anything else. Which then usually led to MORE BEHAVIORS and no amount of reminding him "What are you working for?" could settle him back down. It was just like pouring gas on a fire. It only made his feelings that much more intense.

And because the Kiddo is a product of years of behavior therapy, if we don't specify a reward he will simply create one in his own mind.  Once that is decided, well, if you know autism you know that is etched in stone.

So what is a gal to do?  Plan some "Non Contingent Fun!!"  Doesn't that sound like a freaking hoot? We have to surprise him with random outings and activities off the cuff that have no ties to anything.  The idea being he will then let go of the fixation of the place and not build it up attached to it as only an earned reward that he could possibly lose.

Basically, we have to plan to be random. ;-)

It also means most conversations about any future events have to take place by my husband and I texting each other so the Kiddo doesn't hear about them before we spring them on him. Good thing we have unlimited texting on our phone plan!

We also need to work on Kiddo's need to hyper control everything.  Because even giving into him doesn't help and frankly, I don't want my Kiddo to become a raging douche.  I kind of feel once you decide to become a parent, you are promising the world you will not create an asshole.  You're going to raise a good person who is kind and flexible.  Of course, we got one with autism so that flexible thing gets a little tricky. It's not impossible though.

We're doing a lot of "Forced Choice".  Meaning, making him pick between two things but the secret is they aren't huge things. Just things that make him feel in control but it's not going to really alter anyone's world if he gets to decide between the green or blue straw. Like you have to wear pants but you get to pick which ones.  Hit him up with a non negotiable that sort of looks like there is some wiggle room.  We're learning to aim small.  Like Daddy Fry said this weekend "You want to go for run or a bike ride?" and then Kiddo immediately replied "Run AND Bike ride" and Daddy Fry got all his cardio in this weekend.  See what I mean? Next time it's "We're going for a run. Want to wear your red baseball hat or your #TeamQuirky one?" (And clearly the answer is the #TeamQuirky one.)   So the little stuff, we're letting him have the power as much as we can so he feels some control without controlling us.

The biggest change in what we are doing is giving extremely short notice when there will be a big change to the schedule and this one dude, I will not lie.  It is scary as feck! We had always been that family that gave him plenty o' warning with stuff because he needed the time to process it.  Since he started this new middle school, he simply cannot handle knowing a change is coming.  It's just an anxiety bomb ticking away.  It was suggested we tell him pretty much the moment before something has to switch.  So he doesn't have time to really stew on it.  It ties in with that whole "non contingent fun" I wrote about earlier.  So far, he's been doing okay with it.  I guess the element of surprise is working in our favor.  It's been a big adjustment though.

I think the biggest challenge though is school knows the plan and we know the plan but the general public, they don't. It's just another thing I have to be on alert for with the Kiddo.  Conversations I have to have before I go places to give folks the heads up.  Plus damage control when someone innocently mentions something because they didn't know it could cause upset.  Like the Kiddo's music therapist has been coming to our house for the last few weeks because he's moving offices.  Well his new office is finally ready and he mentions it at our last appointment that we can meet him next week at the brand new place and POOF!  I can just see the anxiety switch on with the Kiddo. 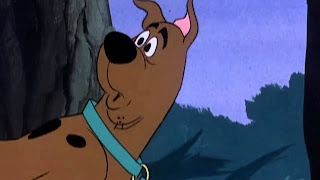 Did you ever watch Scooby Doo as a kid?  Kiddo's reaction upon hearing changes is very similar.


And it's a completely normal thing to say to someone. "Next week we'll meet here." but there I was spinning the redirection wheel on the Kiddo.  "Don't worry about it Kiddo. New is Good. Hey, look over there. French Fries!" and I spun that kid out of the house to go score some "window fries" at the Drive thru so fast I think my car left tire marks on my street.

So here we are almost a week later.  The night before the latest schedule switch that he wasn't suppose to hear about but did and I can see some of the anxiety coming.  Daddy Fry and I, we just got to keep this Kiddo busy though.  It means slapping on the smiles even when we might not always feel that chipper but we have to because Kiddo smells fear.  It means planning out every move of our life like a military operation and I don't remember enlisting.  It means having to say goodbye to what used to work and trying something new because what other choice do we have?  It's always having to be "on" even when I am so desperate to find the button to turn it "off".

But that's what it is, so we try.  We tried before and stuff got better.  We can do it again.

Posted by Eileen Shaklee at 8:12 PM