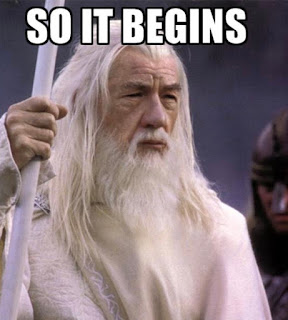 August. I freaking hate this month.  If you follow me on Facebook, you know already that Kiddo hates Wednesdays so much we have dubbed them "WTF Wednesday" because we have just grown to accept that the day is going to suck donkey balls.  It's just how it is.

How he feels about hump day is how I feel about August and Autism. It is not a good combo. Not a good look for the House of Fry.  Not. At. All.

I do not know what it is about this stinking month but the Kiddo, like clockwork, falls apart every single year.  Maybe it's the ending of ESY and the long stretch of no structure ahead.  Well, no structure from school.  Trust me. Mama Fry runs a tight ship around here. Correction, Kiddo runs a tight ship around here.  Maybe it's being away from his classmates and being an only kid makes him feel lonely. Maybe it's the planets being out of sync with the Sun and the position of the Moon.  All I know is, it's it's consistent with being Hell wrapped in chaos topped with a mayhem bow.

But we power through because despite me trying to convince my doctor that I need to be placed into a medically induced coma for the month, I have no choice.  I'm not really taking it one day at a time but more like one moment at a time.  It's all I can do.

What I do have in my corner is a little help from the state's Perform Care system.  We finally have some people coming to the house to work with the Kiddo and it's been going pretty well.  We have successfully gone through the stages the Kiddo getting to know them. Phase 1, act adorable. Phase 2, act mischievously. Phase 3, question everything. Phase 4, raise HELL. Phase 5, Accept the fact these folks are coming to the house.  The honeymoon period was definitely over when he first melted down hard in front of them.  He usually only saves that for folks he loves, so honestly, they ought to take it as a compliment when he tried to lunge at them.

Since it's going well, we're adding to it.  Behaviors are our priority right now, followed by being an independent person a close second.  It's also made me aware that while I need to add more of that to his routine, we need to end some of the parts of his old one.

Like finally breaking up with the magical speech therapist who graduated from Hogwarts.  You may be thinking "Isn't this the one that gets him to eat all sorts of different foods? Are you crazy?? Wait, she'll have an opening. Does she take my insurance?"

But it's absolutely time.  Speech wise, it's as good as it's going to get with him.  I knew there would be a time where we would have to make choices like this.  When to stop things even though those things weren't completely fixed or done or I don't know what to call it.  I've had to break up with therapists before.  (Read all about it here.) I don't know how this is going to go over with the Kiddo as he absolutely adores her and I have a mad respect for that woman. I'm sitting here thinking "Can I bring a six pack to the final session? Cause she's really earned it."

There's a small part of me that's like "Girl, why on earth are you making a big change like this in August?" but I also know that I accommodate my Kiddo A LOT. Delaying things a month or two isn't going to give him what he needs.  If things are going to be topsy turvy,  might as make the changes that need to happen anyway.

Oh August, you make me your bitch every year. I know I've said it before.  Autism is easy. It's the anxiety that comes with it that needs to go kick rocks in flip flops.

Wish us luck and a quick month!
Posted by Eileen Shaklee at 7:25 PM