Do you know how hard we worked for that "Hi!"?

In an effort to help keep the Kiddo busy and for me to stay a bit sane, we went away for a couple of days to a resort that has an indoor water park.  We've been to it before and the Kiddo absolutely loves it.  We like it because it's just big enough to keep him busy but small enough to keep him contained or be "on" him if trouble or an autism misunderstanding comes up.  He was pretty excited to go. I was excited to not have to cook for a few days. It was a win/win all around.

One of the times Kiddo and I hit it alone so my husband could go get his presidential history buff on and go spends a thousand hours touring James Buchanan's house. Despite enjoying all the numbers that go with the presidents (Number 15!), that is pretty much where the Kiddo's interests ends.  Since that home was without pool slides, that was not an activity for him.  I was happy to go with the Kiddo to the park because I knew he would be happy. I was happy my husband was getting his historical jollies on without having to rush or tend to autism at the same time.  I also knew he would tag me out later and take him out and I'd put my feet up and read. It's how we do vacations.  A non stop game of "Tag, you're the responsible adult!".

It wasn't too busy when we hit the park. I set up camp with our towels and stuff and tried not to think too much about the soup of kid pee and germs I was most likely wading in. This seemed to be the visit where Kiddo really didn't need me to run autism interference.  At all.  He patiently waited his turn at the slides.  He didn't cut in front of any other kids.  He followed the rules of no running and making sure he got out of the way at the end of the slides as soon as he went down them so the next kid could go.  After a good fifteen minutes I realized I could get out of the petri dish umm I mean, pool. I could go sit down! (In a seat with the best vantage point to see the whole area and be by the one escape route...ummm... I mean, exit.)

I could be like one of those parents of those neurotypical kids.  GASP!  I know.  So bizarre.

But because I am still a "Smother Mother", I made it a point to lap around the place now and then to keep tabs on him and make sure everything was okay.  This is is when I noticed that the Kiddo was in fact trying to be social.  In his usual way, he was pretty much ignoring/tolerating the kids.  He's never going to be the one to engage first. That's just him.  However, he does gravitate towards adults. I think he kind of understands that adults are "in charge" and will gladly lead him along to where he needs to go.  Be it in a conversation or when it's okay to be the next one to go down the really big slide.  As I expected, I saw him trying to engage with the only other adults in the River of Ringworm. The lifeguards.

He might not know your name but he knew who you were.  He knew you were in charge and keeping all the kids safe. (Well safe from possible drowning. There was nothing they could do to save someone from the "Lake MRSA" they were swimming in.)  So every time my Kiddo passed by one he would stop and say hello.

We were in there for about two hours that time.  Guess how many said "Hi" or "Hey" or "Do you know anywhere else that is hiring because I can't soak in this giant pile of exploded swim diapers another day?"

Now, I get they are at work. I get they can't be having full conversations every single time my son swims by them.  They have to keep their eyes on the water.  Not a single one of them could smile and say "Hi" back?  Like take the 5 seconds and greet a kid. Is it that hard to do? Do they need a social story? I have plenty.  Seriously, I travel with them.  I have an app on my phone.  You never know when you are going to need one.

But here was my Kiddo happy to engage with another person, multiple times, and he was being ignored. Now because he is the original gansta of giving zero fecks, he would say it again and again.   He wasn't going to let it hold him back or get him down.  I can't help but wonder what he is thinking about it though.  We have worked so hard for years to get that kind of polite spontaneous engagement out of him and here's his moment and Pfffft. Nothing.  No response. No acknowledgement. Was he wondering to himself "Well, what's the point of all that work they keep making me do in speech and in school about how to be polite and then no one does it?"

Since I have had the Kiddo I have noticed that adults often ignore other kids that aren't their own.  I mean, I get it. If I hear a kid screaming somewhere I do the quick check of "Is that mine? No?" and breath a sigh of relief that I don't have to be "on" in that moment.

Now that I have a Kiddo who has worked so freaking hard to get where he is with his speech and communication, any kid that starts talking to me, I answer them. It takes little effort on my part. We as adults are always on kids to be respectful to adults and yet when they are friendly and say "Hi Lifeguard!", they get ignored. It's kind of hypocritical, don't ya think?  So that's how I pay it forward into the universe and say Hello back.

Because it's the freaking polite thing to do and shit.  Be nice and say "Hi" to my Kiddo.  We worked hard for that god damn "Hi". Spot him a head nod or a ""Sup?" back.  It won't hurt you. 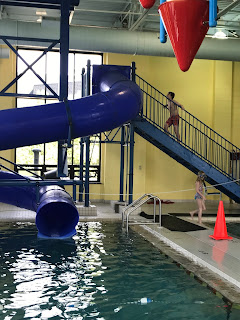 Kiddo climbing the steps to the slide so he can jump in to get a fresh coat of kid cooties all over him.