Autism and the Dentist

Autism comes with a lot of doctor visits but if there was one that is the most challenging, I'd have to say it's going to the dentist.  Kiddo is fifteen now, so we have had our fair share of visits.  Much like me, he hates the dentist and I don't blame him. You're on your back, with some bright ass light bulb shining in your eyes while some guy has his hands in your mouth, scraping metal tools against your teeth. Honestly, just typing that skeeves me out. It's gross and it's scary and I can't imagine having to face it with communication and sensory challenges to boot.

But it has to be done. This is a non negotiable. He is going to need his teeth to chew. It's hard going on these visits but here are some of the tricks I have learned that make it a bit more doable.

1)Finding the right dentist. You're best bet for finding the right fit for your child is to look for a pediatric dentist.  A dentist that specializes in children is much more likely to have experience with the special needs population. Plus, they usually have a variety of tricks up their sleeves to distract from the scary stuff. Kiddo's dentist has video games in the waiting room and flat screen TV's over each exam chair with access to Netflix.  Ask your child's classmates parents who they go to see. That's one thing I have learned from the Autism Mom Mafia, if there is a person to see, we'll all know about it.  Likewise if there is someone to avoid at all costs.

2) When you call to schedule the appointment, make sure you tell them there and then that autism is about to roll up on that joint.  I'm all for spreading autism awareness where ever we go but for stuff like this, it's better for all involved to give them a head's up.  Kiddo's dental office likes to get us in as either the first or last appointment of the day.  The office is less crowded. No one is running behind.  It's usually quieter. (Well, it is until we show up.) This is also a time to fill them in on sensory challenges they are about to deal with. How verbal your child is.  If this is your first time going there, do yourself a favor and ask if they can email you all the "new patient" information forms so you can fill them out at home. I don't know about you but trying to wrangle my Kiddo in a new place while trying to fill out a half a dozen pages of medical history and insurance information is not my idea of a good time.

3) That first visit. Let's just say keep the expectations low and any actual dental work that gets done is gravy.  This is more of a "Getting To Know You" than a medical appointment.  Again, this is where a good pediatric dentist is key.  They get it.  They usually will give rides in the chair, let the kids see the instruments, and talk about what gets done with the child in age appropriate terms.  If you have an older sibling, have them have the actual exam and be a model for your child to watch.  If you don't have an older sib, rent one.  Just kidding but you can point out the other kids in the office getting their exams.  Google dental visits! You think YouTube doesn't have videos of that?  If they can have a guy video taping elevators, you know they'll have those.

4) Comfort sensory items.  I usually bring a couple of fidgets for Kiddo to fiddle with during the exam.  The best item that can help your child is what they already have in their office. X-ray bibs! I'm totally serious. They are just like having a weighted blanket on.  Kiddo loves his weighted blanket but schlepping it to the dentist office is a bit much. This works just as well.

5) Sedated dentistry. This is a really good option if dental work is just too hard for them to handle due to fear or attention span. Sitting still is not something my son does well or at all and sometimes dental stuff can be complicated. Like when he chipped his front tooth.  There was no way he could sit through all that.  So yes, this is what had to be done.  It does come with same extra prep work. You need to get your child a physical clearance exam a week before the dental visit by their regular doctor. They also aren't allowed to eat after midnight the night before the procedure.  They'll most likely wake up cranky as Hell and nauseous to boot after the dental work is done.  (Expect throw up. Have a bucket handy for the car ride home.) Kiddo was pretty sleepy for the rest of the day but by the next morning, he was back to fighting speed. The nice part about complete sedation is they were not only able to fix the tooth, but he got a cleaning and a full set of X-rays. I know some parents that even get a script for blood work to be done. I actually sort of joked that I was going to have a barber come in to cut his hair while we were at it.  I may have taken full advantage of his hitting the pillow hard that night by cutting all his nails.  (I totally did and I would do it again.)

Another option for dental work is good old fashioned "laughing gas". It doesn't knock them out but it will relax them and in my son's case, make them sing Cat Steven songs at the top of his lungs like a drunken sailor on shore leave.  The bonus is it doesn't require getting a clearance from their pediatrician and they only have to refrain from eating for four hours before the appointment.  It also wears off very quickly once it's done.  They are back to business in no time.  When Kiddo broke his front teeth the second time, (Yes, the second time. You read that right.) we were able to do it this way.  Not only was the recovery time so much easier as it did not make him sick, it was a HELL of a lot cheaper.  Which was great because when he broke his front teeth the THIRD time, (Yes, a third time. It's why I drink, people. )  we knew exactly what to do and my wallet didn't scream in too much agony.  We now use laughing gas for cleanings as well.  It just makes it easier for all involved.

6) The most important thing to remember is to keep trying and keep going. It's really tempting to let going to the dentist slide when you are raising a child with autism.  There's a ton of other stuff you are trying to take care of and the idea of going, well, I get it.  Sometimes it was just way easier to just blow off going.  It doesn't do your kid any favors though.  If anything this has become something my son and I have bonded over. A mutual dislike of all things dental related.  I acknowledge to him that I know the whole thing sucks BUT like all parents I hold out some bribery over his head to motivate him to power through it.

Okay, so maybe I undo a lot of the cleaning he just got by going for milkshakes after with him but dammit, he's earned it. 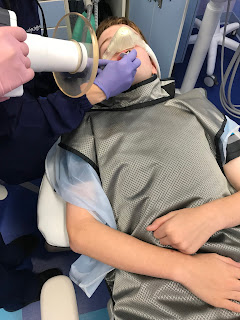 See that how well that X-Ray bib keeps him calm?  He only wants to throat punch us a little for making him get X-rays this time around.

Posted by Eileen Shaklee at 8:38 PM