Talking myself off the ledge

Kiddo and I found ourselves on our own for dinner the other night. After a week of him being off of school, I was not cooking. He happily agreed and off to the local burrito place we went. Now before you say "HE EATS BURRITOS???", calm down.  He eats plain cheese quesadillas which he calls "pizza" because they are melted cheese on a something crust like cut into triangles.  I mean, he's got a point.  This is fun when we go to order and he yells "PIZZA" and I then have to Kiddo to English translate to the confused server.

While we were tucking in, I noticed a car pull up in front of the joint.  The windows were open and the cutest little fluffy dog was peeking out the window. I pointed it out to Kiddo, who got very excited because it sort of looked like one of our dogs.  He started to get "flappy happy", as I call it and kept saying "That dog looks like Maya! That dog looks like Maya!".

But while he was scripting up a storm, I was watching a young girl get out of the car. She was probably twelve or thirteen.  She walked into the restaurant and right up to the take out counter. It was then I realized she was picking up some take out while her mom was waiting in the car with the dog.  She gave her name. She paid her bill. She waited for her change. She then carried it out to the car and off they went.

And I felt tears in my eyes.  This is not something my child could do. I am not sure that he will ever be able to do.  That mom didn't have to worry about her child clamming up with nerves and not talking. That mom didn't have to worry that the girl wouldn't get the right order or that she wouldn't wait for her change.  This child did the same exact thing that my parents had me to do at that age when they were teaching independence/too tired to get out of the car let's send the kid in to get the food. They didn't even have a second thought about it.

This is when I have to talk myself off the ledge because I can easily wrap this sadness around me like a blanket.  You think our kids need social stories? HA! I had to start reminding myself that only a couple of years ago we wouldn't be able to even sit down in a restaurant to eat. It was grab and go and usually through a drive thru because even getting out of the car was a production. I then also reminded myself that even going to a burrito place was progress.  A french fry free meal?  Groundbreaking!

So yeah, he still needed help learning how to focus to order and I often find myself having to repeat what he says because the server doesn't hear him or understand him. I have to remember that he is in fact trying. He tries every God damn day to exist in a world that isn't set up to be kind to those with a different neurology than his.

If he can keep trying, I can. I will get off this damn ledge because it doesn't serve me. It doesn't help him and I. We can keep on chugging along because clearly that's what we're suppose to do. Yes, sometimes I will get sad about this but I need to wipe my tears and my attitude aside. If experience has taught me anything, I just have to feel the feelings and get on with it.  What's my choice? What's my other option?  Wallow in all the stuff he can't do? Trust me, I've done it and I know enough that I will again.  It's a tough cycle but it's part of our lives.

I guess what I am saying is. I'm still surprised how sad I can feel some days about this.  I thought I would be use to it by now but there's always new ways it can creep up on you.

Luckily though, the good stuff can sneak up on you too.  So I'm just holding on for the next milestone he might hit.  Might not be anywhere near as independent as picking up the take out order but he's surprised me before and loves proving me wrong. 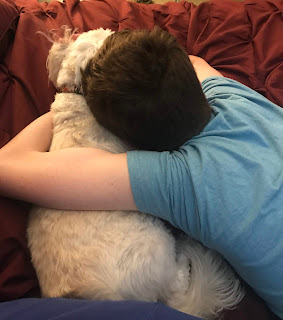 As milestones go, Kiddo being so sweet to our scared dog during a thunderstorm might be my favorite. (Or being the vacuuming champion but mostly the empathy thing.)

Posted by Eileen Shaklee at 8:28 PM