I am a married woman and yet I still find myself "Dating".  At least that's what some of this autism stuff feels like to me now and then. I just came back a pretty bad one. Well that's not a fair description as the date itself didn't even really get off the ground as the other party failed to show up.

In the interest of the Kiddo, I found myself researching and looking for some new things to do with him. We're in a bit of a relationship rut and although I'll be the first to say "We do it the say way every day or there is Hell to pay.", I know a good shove outside his comfort zone now and then is kind of good for him.  Especially in the area of social skills and doing things with his peers.  Despite my instance that my dogs are his brother and sister, they aren't the best peer models. Being an only child, it's way too easy for us to just let Kiddo hermit all up with his iPad and his DVDs and just be chill in that scripting world he likes to live in.

The thing is though, this people doing things with each other and having interactions Kiddo? Yeah, that's not some sort of gimmicky trend. It's actually kind of good for ya. It teaches you to express and advocate for yourself and despite the whole "Mom and Dad can never die." plan I have going, we need you to do that interacting thing more often. He only grows older and bigger by the day. Being independent is a goal.

So the answer for this situation should be finding some sort of social skills group. These are usually small groups of like diagnosed kids lead by some sort of therapist to work on anything from basic manners, turn taking, and even play skills. Sometimes they even get downright funky and sprinkle in some neurotypical kids to do a little "This is How We Do It." (90's club hit flashback. HOLLA!) with playing and modeling behaviors. Sounds wild doesn't it?

I'm also convinced at this point that despite a thousand articles and books that talk about these groups, they don't actually exist. They are, to me anyway, the Loch Ness monster of behavioral interventions. I'm forever chasing them and yet never finding one that actually does what the articles and books I have read say they will.

Yesterday, I had high hopes. I had heard about a group in my county. I had talked to a parent who was happy with the program. It was the sort of thing I was looking for the Kiddo to be in. I had been burned by other groups before. Badly. Including one where the small group therapists left a voicemail message later telling me I ought to have my Kiddo evaluated. (Because why read that lengthy intake form I filled out that had AUTISM written all over it in about ten different places. That would be silly.)

And yet, despite having my heart broken again and again, I keep trying. I filled out the forms. I waited. I finally heard back and had what I thought at the time was a nice conversation on the phone with one of the directors. I really started to get giddy when she suggested I come by on my own without the Kiddo to have a more in depth conversation without the distraction of having to wrangle him. She sent a follow up email confirming where and when we would meet. I was really stoked about this.

Cut to the scene two weeks later where I'm in my car wondering why I was stood up. The person not only didn't keep her appointment, she wasn't even there. No one even knew where she was or what I was doing there and made me feel as welcome as chewed up gum. I put on real pants, make up, and drove thirty five minutes out of my way for this? After waiting a good twenty five minutes, I gave up and left. I have my pride. I did call and leave messages. It's now been twenty four hours and I've yet to hear back from her or the group as a whole. I'm suppose to leave my Kiddo with you? NOPE.

It's one thing to have gone through these long intake sessions with your child and then hear a rejection down the road. This was just a plain old WTF?!?! situation.

I can't help but keep thinking about something an old case worker of the Kiddo's said to me back in his preschool days. The Kiddo gravitates towards adults. I joke all the time how he loves to charm the older ladies. It's no wonder why he is a cougar lover. The only person he routinely hangs out with is a forty one year old woman. (aka Me aka his mom.) So yeah, being an only child doesn't help either. He's just not around kids except for school a lot.

I know I have to find more social situations for him and we are forever trying and failing at this. Up till yesterday I had a very "To Hell with them. We'll go find the thing that works."  kind of attitude about it. For some reason this one stung. I am thinking this is just another example of the myth of the "wealth of services" a lot of folks think we autism families have access to using. It's hard to use something that simply doesn't exist.

Well, I guess it's a good thing that the Kiddo gravitates towards adults because he's only growing taller, bigger, and older by the day. 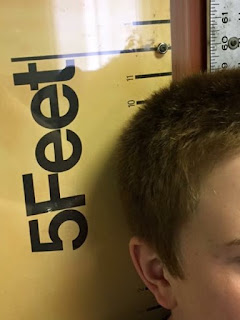 If I could just put some textbooks on his head, maybe that would slow down his height...

Posted by Eileen Shaklee at 8:52 AM