The Good, the bad, and the surprising parts of Autism.

My husband finished dinner last night and the Kiddo took it upon himself to clean up after him. He took his plate and fork and placed it in the dishwasher. By "placed" I mean "threw in there." but dammit, "A+" for effort! I had already left the room, so Daddy Fry went to find me to share this.

As we both stood there marveling in how utterly awesome/sweet that was, the Kiddo came up behind my husband carrying the half finished wine glass the Daddy Fry had left on the table and handed it to him. Then he went back to his iPad.

Well duh! That story wrote itself.

It's an example of how freaking thoughtful the Kiddo can be and a reminder to us that he's often more capable of things. Only child with a side of autism often lends itself to me overdoing things for him.  Which if the pre Kiddo Job Coach to autistic teens saw, oh she would give me an earful. I catch myself doing it all the time.

And yet when we went out to eat with family recently, I found myself barely eating because I was on non stop Kiddo cleaning up duty. It seems that despite being very interested in consuming a bowl of rice at the Chinese restaurant, it was a "utensils optional" day according to the Kiddo. Sticky white rice and grubby eleven year old fingers, not cute. This coupled with him having one of those "Let's raise awareness about my autism LOUDLY!" day with tons of stim noises and scripting. I knew why he was doing it. The place we went to was new, different people joined us that we don't see often, and the food wasn't like how we get it at the place by us. It was a trifecta of suck. Even though I knew that it could go badly going into it, I still had to try because like I mentioned above, he can really surprise us at what he can do. If we don't give him a chance, how will we ever know?

Still, I won't lie. I was tad annoyed/frustrated/ticked that we were having a less than stellar moment out. (Hey, before you rant on me for it remember two things. 1) I'm human. 2) My mom reads this.) I'm allowed to get annoyed just like he's allowed to stim. It's what we do. I have to try and remember as frustrated as I felt, his anxiety was through the flipping roof. That most days it's the anxiety, not the autism that is the bigger pain in the ass in this house. We're talking about a Kiddo who could medal in worrying.

Here I was thinking "Meet ya out to eat? Sure! We can do that." and SURPRISE! Not today, Satan. Not today. Did you enjoy that one shrimp dumpling you got? Good, cause that's all you're getting to eat at this meal.

That's just life with the Kiddo.

His surprises can be awesome and amazing but they can also be awful and sometimes downright terrifying. Even though the bad ones can really grind my gears, I still like holding out for a good one. They do pop up now and then.

I'm not sure what to call this one. Certainly surprising though. 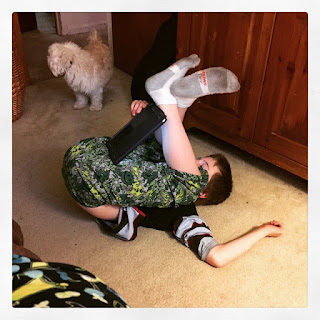 Kiddo is either doing Yoga or surfing YouTube. I'm not sure.

Posted by Eileen Shaklee at 6:55 PM