It's a MAJOR Award!

The last few weeks at French Fry Inc. have been eventual. We've had dental surgery, our first outing to a Broadway show, an IEP for the transition to middle school and yet another bust in the terms of finding an appropriate social skills group. So when I was chosen to be honored at an Autism Moms dinner, I was pretty floored and it was exactly what I needed. Let me get this straight. You're going to honor me, let me bring some guests, feed me, give me an open bar, let me socialize, without having to Kiddo wrangle? SIGN. ME. UP.

Frankly, it felt kind of weird to be awarded for blogging. It's a pretty self indulgent activity to be honest but I'm not about to say "No" when someone wants to make that much a fuss. Plus, here I am preaching about taking care of yourself to be a good mother to your kids and I hadn't had a girl's night out in a long time. So off I went to the 4th Annual Pamper Me Dinner for Autism Moms.

There was one catch. I was asked to "speak a little about your journey with autism."  Not going to lie, as nervous as I was to do such a thing (Cause it's so not scary typing on a laptop in my pajamas with Mob Wives playing in the background.), I was really excited about it too. Mama Fry has a background in theater. This autism stuff is my passion. I could write a kick ass speech and I did. In typical Mama Fry style, on my phone while waiting for the Kiddo to finish up with his speech therapy appointment.  That's how #TeamQuirky rolls.  On. The. Fly!

Since not all of you were there to witness me blank one paragraph in and then have to improv and wing it, I thought I would share it here.  (Mama Fry's memory ain't what it used to be.)

"Thank you so muchI was asked to say a few words about "my journey with autism". I don't know about you but I don't feel like it's a journey. It's more like multiple trips around the same race track. Lap after lap after lap.Yeah, the scenery gets a little repetitive but you learn from it. You start anticipating when parts will be bumpy and know when to sprint when all you feel like doing is crawling on your knees.You'll see and hear when there are folks cheering you on but there will be parts when you are running it alone.You also have a coach. It's your kid. They'll push you farther than you ever knew you could go. To your highest highs and lowest lows.And like most track meets, you'll start seeing some of the same faces who are running those same laps with you. Say "Hi". They aren't your competition. They're your teammates. Team quirky mates that is.So do it right now. Say Hi to each other. Ladies, celebrate your journey and the race. We made it this far. We can do it lap by lap.And take the long way home and tell your husband there was traffic. You think he hasn't pulled that number on you?" 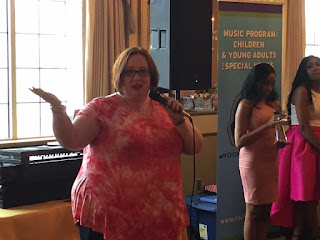 "What do you mean this isn't karaoke? I prepared a medley of show tunes."

But look at that picture. I actually kind of sort of look like I know what I am doing! Ha! As if.

Then I got this very nice award. An "Empowerment" Award, which I think is a nice way of saying "Your big mouth that can't shut up does good things." I think. Hey, I was able to harness that power for good so I must be doing something right. ;-) 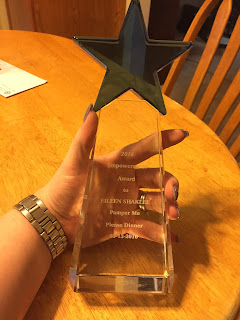 As fabulous as this is, I have to hide it up high. I could see this going airborne.

And then I was asked to take pictures in front of this thing called a "Step and Repeat." Translation, that wall hanging behind celebrities at events with company logos on it.  What the what??? Me??? 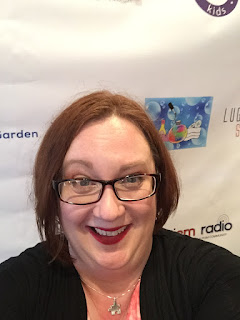 Step and Repeat Selfie because I'm kind of a dork. Kind of? Pffft. Am.

The single best part of the day though, meeting folks that read this blog and follow me on social media. I was asked about a dozen times to take selfies with people. I've never been so humbled in my life that anyone would think of me enough to want to do that.

I also had a table full of friends that made the trip to see me. Again, what the what??? Floored, stunned, honored and grateful that autism has brought these people into my life because they are the most amazing group of humans on the planet. (I suspect the open bar and the kid free day was a perk but I'm going with the idea that they just came to be supportive.)

By the end of the day when I finally got in my car to drive home the emotions of the day really washed over me. I cried. Not the ugly snot running out your nose kind but the "God dammit, this is gonna feck up my mascara and make my eyes red." kind. I'm still in awe of all of this.

Thank you all so much for being my #TeamQuirky teammates.

Posted by Eileen Shaklee at 9:17 PM