Many years ago I was on a date with a guy who noticed I had a bruise on my arm. It was from an autistic student that had pinched me while working with him.  My date became even more upset and confused when I shrugged it off as just a typical day at work.

Date:"That's terrible! He shouldn't be there!  He should be sent someplace else."

Me:"Dude, guess where I work?  Someplace."

We didn't date much longer after that.

"Someplace" has always been in the back of my head since we have started the long and strange trip with our Kiddo and autism.  I kind of always felt that as long as he was in our town's school district, things weren't so bad.  Having worked in a private school for special needs students, many of which had autism, I really was happy he wasn't in one.

Our school district is unable to provide a free and appropriate education in the least restrictive environment for him.  Now I am shopping for "Someplace" for my own son.  How the feck is this even happening?  And I get to do with him in tow because I will be damned if I am getting a phone call EVERY. SINGLE. DAY. like we had been about him while we are trying to tour schools.  Last week I had enough.  Kiddo had enough. I was tired of seeing my son be a completely different person. One filled with so much anxiety and fear.  Even at home some of the things he's been saying and scripting about his school day was making me think "WTF?" on a daily basis. Like some really shitty statements that were said to him or classmates and yes I believe him because HELLO! Autism. Scripting word for word is his superpower.  He's been bit by another student.  He's taken to eloping out of the classroom, a behavior he has NEVER done.  Banging furniture. Throwing things.  Grabbing staff and students. These are the behaviors of pure fear, not malice.  So I yanked him.  I guess we'll be setting up some home bound instruction till we figure it out.

I told the director of Special Services "We're done. Get his stuff.  Get his meds from the nurse and my son.", which she did. Then the case worker packed his stuff and brought it to the main office. Not a single staff from his room came down to say goodbye to him. That said it all to me. I took his hand and we left.

I have explained to the Kiddo that we are on an extended vacation.  He still doesn't fully understand that he isn't going back there.  Until I have a place to say that he is going to, I won't say a word.  It will just confuse him more and to not have an answer will make his anxiety even worse.  I'm sad he will be leaving kids he's known since he was three.  I hate we won't have his bus driver anymore who was an absolute joy. It is what it is though.  His heart will be broken but what other choice do we have other than to deal with it.

I feel bad too because I know I'm not the only unhappy family with that school and class right now.  I worry for those kids. I can only take care of our situation though.

So wish us luck as we tour some "Someplaces" for him.  I hope the process isn't long and I dread the trauma and confusion that's about to happen when we tell Kiddo about the new "Someplace" he's going to go.  I am very concerned about how this will play out.  I know not all private schools are like the one I used to work at but I can't help but be very worried all the same.

Somethings can't be solved by just ordering another side of fries but if any of these schools just so happen to have fries on their lunch menu, it wouldn't suck. ;-) 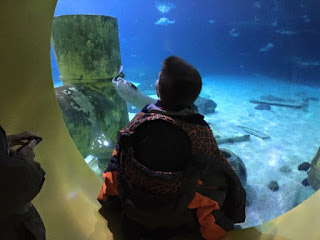 Posted by Eileen Shaklee at 7:56 AM