"So, what do you think of the new school?"

"What do you think? Better? Same?"

The above questions are what I keep hearing about the Kiddo lately.  Last week, Kiddo started at the "New School". (Sounds like an ad slogan. "New School. Brought to you by the makers of School Bus and Lunch Box. Educate your children with a new and improved formula!")

And God, this is when I know the Kiddo is just freaking adored because EVERYONE has been asking about him and how he is doing.  It's still early days and I know I am jinxing saying anything BUT I like to live dangerously. So I'm gonna.

So far, so good. I simply like what I see in the Kiddo.  It's a lot of subtle changes but they all add up to good stuff.  Like;

1) So much freaking LESS anxiety. Thank you Sweet Baby Jesus in footie pajamas but the morning before school are so much less stressful.  I'm no longer pretending to be the freaking "Hey! Hey! Everything Is Gonna Be OKAY!" cheerleader on a Red Bull bender. Trying to save face and pretend it's all fine and not react to his anxiety. Holy crapola. It's just so much better.

2) He's actually starting to talk about the people and kids at school. Loves showing off that he knows what rooms have what classes in them.

3) His appetite has improved greatly.  Not sure if it's a growth spurt or just a settled stomach but I cannot shovel the food into him fast enough.  As a fat woman who enjoys cooking and was always worried that he was too skinny, this pleases me.  You want more food??? You got it!

4) He's engaging more.  Looking to be silly and wants to do goofy jokes with me. (Kiddo and I have A LOT of inside jokes.) Eager to show me what's in his folder from school of the work he did that day.  (FYI, he's done more academic work in five days there than he did in three months at the other place.)

5) He hasn't mentioned his old school once.  Not a single staff member. Yep, that pretty much says it all to me. 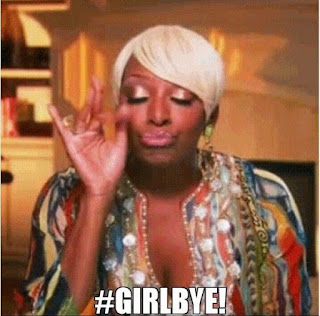 Much like Nene, Kiddo has "blooped" and left the building.

Now, he hasn't been an angel there at the new place either.  You see, "Old School" taught him quite a few bad habits and he rolled them out at the "New School" on the first "WTF Wednesday" that came around. (If you're new here, Kiddo HATES Wednesdays. We don't know why. He just does. Cause autism. What else can I say?) The new teacher however was like "NOPE."

Not Kiddo's teacher but I suspect nothing he did was anything she hadn't seen before.


And here's the crazy thing that she and her staff did.  THEY HANDLED IT! I know!  I didn't get phone calls. I didn't get emails the length of "War and Peace".  I was told "This happened. We did this to correct it." Most importantly I wasn't told to come get him.  The Kiddo, in the middle of one these behaviors, actually started telling his teacher "Call mom. Go home with mom." because that's what happen every single freaking time at the old joint.  Imagine his surprise when she told him "No. I'm not calling her.  You're not going home."  She showed respect to his feelings but also showed him that she was there to support him and help him when he needed it the most.

This was also the week both my husband and I realized we both have "Phone Ringing PTSD".  We still jumped every time it rang. If I called him for anything at his job the first thing out of my mouth was "Hi Hon. He's fine. I'm actually calling about something else."  A week later and I'm still doing it. Today he told me to send him a warning text before I call. ;-) So yeah, we're both still kind of jumpy.

Today he came home with a perfect report and I nearly did back flips down the street. I would try to but I'm old and out of shape and very accident prone. So let's not say I did instead.

It showed me that with the right supports, the right environment and the right attitude can help him. It gave me hope.  I know the problem is far from solved.  Good old "WTF Wednesday" looms tomorrow but  I'll enjoy the fact that it was a good day.  We live in moments and right now that moment is good.