"Why is he upset every Wednesday?"

I know exactly why the Kiddo hates Wednesdays and there's not a God damn thing I can do about it. Why you may ask?

His behaviors every Wednesday to get to the thing he wants (Music therapy after school) are now creeping into Tuesday. I could almost deal with the weekly "Wtf Wednesdays" if I knew I only had to power through a day of it.  Last night however, he decided to ramp it up about being pissed off at having to go to school the next day.  Why you may ask?

"Well can't you just change the day he goes and not tell him when it's coming?"

Tried it. Didn't really work and it's not that simple.  Not to mention have you ever tried to move a therapy appointment?  Do you know the ripple effect that has over your schedule and the therapists schedule?  What am I suppose to do?  Demand other folks move their appointments around because of my Kiddo?  I don't think I could withstand the #TeamQuirky backlash/karma that would then surely come my way.  Plus, he knows he has this as a therapy.  It's insulting to his intelligence to hide it from him. Also, I don't like lying to him. Which is what that feels like to me.  I won't screw around with that trust.

Stop.  This is where I need you to not talk.  There is no answer to this. Why you may ask?

This and a thousand other challenges we have on any given day is the only explanation. Autism.  May not be the answer that actually answers the question but it's usually the only reason why something is happening that doesn't make a whole lot of sense to the rest of the neurotypical world.

The only part of this that isn't ALL autism is Kiddo not only thinking but telling me that he will act up as much as possible so I will come get him at school.

because THANKS OLD SCHOOL FOR SETTING UP THAT BEHAVIOR!!!  Yep, thanks to your pure incompetence on how behavior therapy actually works and sending him home all those times. Guess what you taught him to do? Act up = go home.  Thanks a fucking lot.  We have not crossed the threshold of that school since November and your actions are STILL screwing over my Kiddo.  Oh? You're surprised he won't let that go? Seeing as it was weeks ago since he's been there?

Because there is nothing this Kiddo loves to do more than when he's feeling sad, he makes sure to remember every sad time he's had.  Every wrong ever done to him.  Every time he's had a disappointment.  A real walk down meltdown memory lane.  We have to hear about stuff from years ago and help him get through it. 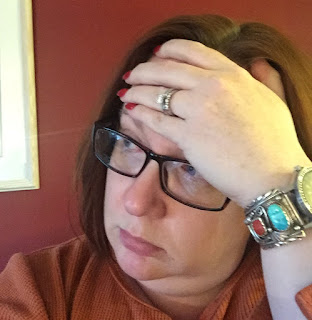 I wonder if I can palm a fifty to the bus driver and he'll pick him up Tuesday night for Wednesday school. Little camp out on the bus? Maybe? I kid. I kid.  (maybe)

Posted by Eileen Shaklee at 8:29 AM