"Do you think Barron Trump is autistic?? Why won't his parents say?"

STOP. Just full stop right there. Zip your lips. I have some things to say to all of you asking me this and I have the receipts.

First of all, Barron Trump is a ten year old child, whose life just got twisted upside down much like The Fresh Prince of Bel Air without the benefit of having DJ Jazzy Jeff as his homeboy. Think about it. Who are his peers here that he can go kick it with? Like his life prior to this wasn't complicated enough?

Second, who the Hell are you to start clocking his neurological make up from afar? Cause seriously folks, that's what you are doing.  I don't care if you are some fancy schmacy doctor with degrees up the wazoo.  You don't get to diagnosis and then share it with the world.  Nope.   Let me put it in terms you can understand here.  Would you like YOUR doctor to run out in front of you and announce to all that could hear your weight, your blood pressure numbers, or that little infection of yours you picked up from Spring Break '94 from that guy who's name you don't quite remember but you remember to stay clear from Jagermeister shots ever since?  Yeah, it's like that.  It's your body. It's your choice. It's your business.  It's Barron's brain. It's Barron's business.

Third, what about his parents?  They could do so much for the cause and awareness and could slap a puzzle piece on the American flag or something.  It could help so much.  Yeah, I'm sure it could or it could also be a clusterfuck.  What if these were the parents who's ideas about different neurological make ups are down right abusive and dangerous? You really want them representin' #TeamQuirky?  Cause we have already had  a few of those well known celebrities who haven't exactly helped the cause. *coughs Jenny McCarthy cough*

You also don't know where any family is in their (and God I hate using this cliche but here I am having to use it) "journey with autism" or journey with anything because again, we have no idea what this kid has or does not have.  Not all families are screaming it from the rooftops from the get go or even the long go.  It took me years before I was comfortable discussing autism and the Kiddo.  It was up to me to decide when I felt like sharing about it and it's up to them to do the same.

Finally, check yourself.  Check your privilege.  Why are you making such a big huge deal out of this one kid? That what he may have is something that his family is hiding and it's super bad! Gosh darn it we have to tell everyone because you got all Inspector Gadget on YouTube clips about him and you're going to expose it!  How does this even matter to you and your life?   This is putting further stigma on those who have different neurological make ups.  It does not help the cause.  It hurts it.

I already told Betsy DeVos she doesn't get any fries.  Don't make me take away yours too. I will. No fries for anyone.  I will make you go sit in time out and think about what you did to a ten year old kid.

Listen, I did not vote for this kid's father.  In fact, in many ways what his father stands for is pretty much everything I am against as a person.  I will say this.  Back off Barron.  Back off any person, child or adult, that you feel the need to Web M.D. diagnose drive by on.  It's simply not your business.  Period. 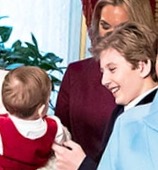 Posted by Eileen Shaklee at 6:17 PM