If you didn't think that having a child with autism was overwhelming, try figuring out the best ways to treat and support that child with autism.  In the time it will take you to read this blog post, several new studies will have come out on what might have caused autism. (Newsflash. I don't care. Seriously, I don't.  I've written about that here. "I don't care what causes autism."   )

It only stands to reason that for every new cause study that comes out, a brand new sure fire treatment for autism will follow.   The variety of which will be vast.  From diets to therapies to gadgets.  Where the Hell do you even begin with all that crap? Seriously. You find out you're having a kid, you at least get a baby shower out of that.  Where's the"Autistic Kid" registry?  Why can't that be a thing?  It needs to be.  All of us old timers could stop by with a covered dish and shower you with chewelry and books that are actually good. The dress code would be "pajama casual/no bras" cause we get it.

Every time a new "thing" comes out, I can betcha dollars to donuts that my inbox will get filled with messages from friends and folks asking me "Hey, did you hear about this new thing?"

Followed ALWAYS with "Do you think it's a scam?"

And because Autism is freaking expensive, every parent is usually thinking this because we have been burned so many times.  I've written about that here. Autism, some accessories sold separately. Our hearts and our wallets can only take so much.

But since we've been doing this autism thing for ten plus years now and I have some autism tenure, here are some of the things I have learned that may or may not help you when trying to figure out what to spend your money on for your kids.

2) There is no way to know what those things will be the things that work. It doesn't matter what it did for my kid.  We're talking about your kid here.

3)Not one damn thing is going to make autism going away.  Spare me the "recover" double speak of the snake oil gimmicks.  Notice they never say "cure", they use words like "recover" to scare the crap out of you. If that's part of their sales pitch to you, flip 'em the bird and walk away.

4) The only thing these things MIGHT do is help lessen some of the more severe symptoms of autism.  (Like dude, if a lavender oil spray on your kid's pillow makes them happy, spray away.)

5) If all this stuff was so rip roaring good, wouldn't it be sold everywhere?  I've yet to see the autism aisle at Target.  I should know. I go there enough.  So again, I look at everything with some serious side eye.

Now I don't mean to be a downer about all this stuff but I just want to remind the newbs to be realistic with this stuff.  If it was that easy, why aren't ALL the parents doing it? You know what I mean?

It also doesn't mean you shouldn't try something. We still try stuff all the time with the Kiddo.  Some stuff has turned out to be awesome. Like going to music therapy.  Others?  Not so much so.  The diets? HAHAHAHAHAHA! Listening therapy? Nada. Chiropractor care? Zip. Braincore Neurofeed back?  Yeah, Kiddo made the guy running it his bitch.

But I still tried it all because not trying would mean not knowing and I had to know.

For as black and white the autistic mind can be, figuring out the best ways to support your loved one with autism can be filled with a lot of gray. 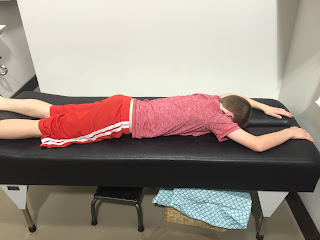 Kiddo at the latest "Let's try it." Shame too. That chiropractor was a good dude.

Posted by Eileen Shaklee at 8:38 AM